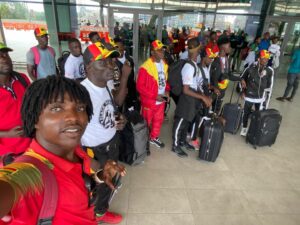 The first batch of Team Ghana arrived in the United Kingdom (UK) for the 2022 Commonwealth Games in Birmingham.

The 2022 Commonwealth Games would begin on Thursday, July 28, and end on Monday, August 8.

Ghana would be competing in 13 out of 31 sporting disciplines expected to be held at the Games.

The team was led by Mr. Frederick Acheampong, who is the Treasurer of the Ghana Olympic Committee (GOC) and a member of the Ghana Football Association, as the Chef de Mission (CDM), with Mr. Henry Larbi, founding member of Wheelchair Tennis in Ghana as the deputy CDM.

The country has competed in 16 editions of the Games since its inception in 1954. Ghana only missed out in the 1986 Games held in Edinburgh.