July 9, 2022 General News Comments Off on Work to ensure our post-COVID-19 recovery plan – President to envoys 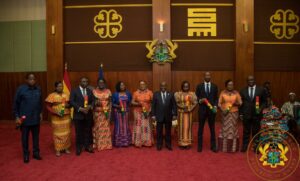 The ten envoys are Ambassador Ahmed Hassan, former Director of State Protocol, who will now serve as Ambassador-at-Large, Mrs Merene Benyah, a non-career diplomat, as the Ambassador to Italy.

At a ceremony at the Jubilee House, Accra, President Akufo-Addo administered the Oaths of Office, Allegiance and Secrecy to the envoys, and congratulated them on their “well-deserved” appointment, saying, “I am confident that you will make our nation proud.”

He told them that their appointments had come at a particularly important moment, where all countries, including Ghana, are working to return themselves to a state of normalcy, following the devastating impact of the pandemic of covid-19, whose effects have been exacerbated by the Russian invasion of Ukraine.

The President noted that the pandemic had brought to the forefront the need for nations to strengthen and deepen alliances and cooperation because “no country can afford to go it alone” and “We either succeed together or perish together.”

“And this is where your work as Ambassadors and High Commissioners would be needed the most,” he emphasized

With economies plunged into recession, and with the grammatic escalation of food and fuel prices, and soaring inflation that has led to loss of livelihoods, the President was hopeful that the world “will sooner than later make up for the lost time.”

Ghana, he said, had decided to seek the collaboration of the International Monetary Fund (IMF) to repair in the short run, our public finances, which have taken a severe hit in very recent times as a result.

“Whilst we continue to work on the medium to long-term structural changes that are the heart of our goal of creating a Ghana beyond aid, I am confident that with determination, hard work, unity and the proverbial Ghanaian sense of enterprise, we would succeed, we would make it and indeed, this too shall pass.

President Akufo-Addo told the envoys that his administration’s unprecedented flagship initiative, the GH¢100 billion post-COVID-19 Ghana CARES Obaatanpa Programme geared to stabilise, revitalise and transform Ghana’s economy, must be the pivot around which they engaged the rest of the world.

He said they should, therefore, familiarise themselves with the objectives of the Programme, which was at the core of his second term mandate because they represented “our surest way out of the pandemic and would thrust Ghana back onto the path of progress and prosperity.”

“Each one of you must help and contribute to the success of the programme by facilitating amongst other things, as much foreign investment into the country as you can,” he implored.

At the multilateral level, President Akufo-Addo asked them to work with the governments of their accreditation to assist in the prosecution of the common agenda in the fight against the scourge of armed conflicts, terrorism, and violent extremism, the effects of climate change, and the continuing illicit flow of funds from Africa.

He urged them to at all times promote the image of Ghana, whose reputation amongst the comity of nations continued to be high.

“You represent a country that as a result of the commendable conduct of the Ghanaian people, is regarded as one of the most stable on the African continent. It is a functioning democracy, governed by the rule of law, and respect for individual liberties, human rights, and the principles of democratic accountability.

“We are regarded as a beacon of democracy in Africa, you are the most visible symbol of our country out there. In all your actions, you must jealously guard our country’s image… I am confident this is a charge you would keep,” he said

Ambassador Emmanuel Antwi on behalf of his colleagues thanked the President for the confidence reposed in them, saying, “we are grateful for the honour to serve you and the people of Ghana at large.”

“I pledge our commitment to serve faithfully and dutifully. We pledge to vigorously pursue Ghana’s foreign policy objectives in line with your vision of transforming the country for the benefit of the Ghanaian people, and we will seek the welfare of our compatriots living in the countries to which we are accredited,” he said.