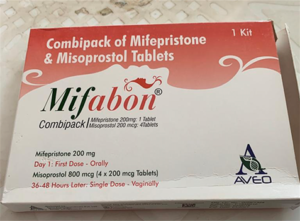 Some pharmacies in Ghana are making profit by clandestinely assisting clients who request for an abortion at their facilities to access a restricted drug for that purpose.

The restricted Mifabon kit is used in terminating pregnancies in the early stages.

This disturbing practice is being carried out in retail pharmacies within local communities and it is making it very easy for people to access quick abortion services through medications, which are not supposed to be stocked or sold as over-the counter drugs.

Preliminary information gathered by Ghana Business News shows that clients including very young girls are able to abort pregnancies with the help of some of these pharmacies, without any follow up on them to ensure a safe outcome after using the kit.

The leaflet inside the Mifabon kit shows that the drugs are to be used as restricted and regulated drugs prescribed and dispensed under professional guidance and by specialists such as gynaecologists, to ensure the proper and safe use of the kit.

The Mifabon kit is a package of made up of two combination drugs, Mifepristone and Misoprostol. One tablet is to be taken orally and the other part used as vaginal tablet or a pessary for the termination of early pregnancies.

Ghana Business News found out that Mifabon is not stocked or displayed as regular drugs in the pharmacies because it is illegal. However, upon request for an abortion by a client, the person is given time to pick up the kit, and this is pointing to the fact that there is a ready market out there illegally supplying the drug to pharmacies.

What is disturbing is that clients visiting these pharmacies for these illegal abortion services are not able to receive follow up visits to ensure they are monitored for the completion of the evacuation of fetuses without any complications but are left on their own.

The usual practice at a pharmacy is to give instructions on how to use the kits and then other medications are added to support the abortion process.

The other drugs added include antibiotics, like Amoxicillin, a pain killer suppository such as diclofenac and haemoglobin syrup or other blood boosting medications to help fight off any infections, reduce pain and replenish blood supply after using the Mifabon medications.

Under the laws of Ghana, abortions are permitted in some situations and this is known to all pharmacists.

Retail pharmacy outlets are not regulated or empowered by law to carry out abortions or assist clients to terminate pregnancies.

Abortions are done legally in regulated settings such as hospitals and other health facilities.The 2017 Standard Treatment Guidelines is the current document containing the position of the Ministry of Health on all matters pertaining to dispensing treatment.

It provides the officially approved prescribers’ and dispensers’ guide for all levels of health care across Ghana including pharmacies and over-the-counter drugs outlets.

The Standard Treatment Guidelines talks about induced or safe abortion describing it as the deliberate termination of pregnancy.

It says the termination of pregnancy is requested for and done for reasons permissible by law either through a surgical procedure or by pharmacological means.

According to the document, “under the current provisions for Ghana, an induced abortion may be carried out legally only under the following conditions: in case of rape, defilement or incest; threat to the physical and mental health of the mother; presence of foetal abnormality and mental retardation of the mother.”

It again notes that “patients given a pharmacological option for abortion would need to be monitored closely for completeness of the abortion process.

Clients should also be informed to report back “immediately in cases of profuse or heavy vaginal bleeding, fever or offensive vaginal discharge.”

Among the treatment objectives of these guidelines are to among others ensure that the legal requirements for termination are met and to ensure safe abortion.

While some pharmacies turn away people who walk in to seek help to abort pregnancies, others are however quick to offer illicit services due to profit motives.

A study study by the World Health Organisation (WHO) and Guttmacher Institute found that 25 million unsafe abortions (45 per cent of all abortions) occurred every year between 2010 and 2014.  The study further notes that majority of unsafe abortions, or 97 per cent, occurred in developing countries in Africa, Asia and Latin America.

A newly released model of estimates for pregnancies and abortions in the world by the Guttmacher Institute, the WHO and the UN’s Human Reproduction Programme (HRP) also found that some 266,000 abortions were done in Ghana within four years.

The study which analysed rates from 2015 to 2019, with the aim of providing deeper insights into access to sexual and reproductive health services in countries of all income levels across the globe, looked at estimates of unintended pregnancy and abortion rates for 150 countries, highlighting major disparities in access to sexual and reproductive health care.

It indicated further that pregnancy outcomes in Ghana in 2015-2019 recorded a total of 1.33 million annually with 741,000 being unintended and 266,000 ending in abortion, which is legal only to preserve the pregnant person’s health.

Regulators including the Pharmacy Council and Food and Drugs Authority would have to step up surveillance to check and stop the spread of the termination of pregnancy among these pharmacies.