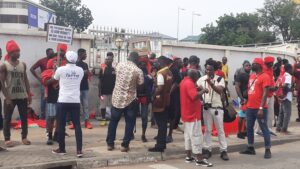 Several hundreds of protesters have thronged the Obra Spot, Kwame Nkrumah Circle, Tuesday morning for the planned demonstration by the Arise Ghana, a pressure group, to express their concerns about the prevailing economic hardship.

The protesters, clad in red and black attire, gathered at the Greater Accra Regional Secretariat of the Ambulance Station, hoisting and waving of flags amidst singing and blowing of trumpets.

Some of the protestors who spoke to the Ghana News Agency said things were not going well in the country, saying the economic situation was unbearable.

Mr Osei Adjei, a protestor, said, “I am suffering to organise myself in my own country, prices of foodstuff fs are increasing every day, making it difficult for me to cope.”

He said almost everybody was complaining about the economic hardships, hoping the demonstration would send signals to the authorities to respond to the needs of the citizenry.

Ms Adjoa Serwaa said “this is not about politics but the general wellbeing of the people. Economic hardship has no political affiliations and that the Government must do something to ameliorate the situation.”

Security personnel have positioned themselves at vantage locations to maintain law and order ahead of the demonstration.

The pressure group has for the past months made their intentions clear to embark on a historic two-day demonstration in the capital city Accra.

The demonstration is aimed at protesting the hikes in fuel prices and the harsh economic conditions imposed on Ghanaians by the Government, organisers said.