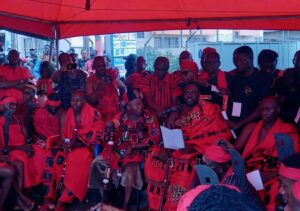 Togbega Gabusu VII, the new Paramount Chief of the Gbi Traditional Area, Hohoe, has been out doored by the Council and Kingmakers with a call for support from all towards executing his roles as the traditional ruler.

The Paramount Chief, who is also Chief of Torkoni Clan and Hohoe, was presented to the people of the Area and other guests in a colourful ceremony with cultural displays after a seven-day incubation period.

Togbega Gabusu in his maiden address, expressed gratitude to the Traditional Council, kingmakers, families, and all, who played vital roles adding that the name “Gabusu” placed a big responsibility on him, and it was a role he could not perform alone and urged all to support him.

He noted that the people were craving a good leader and therefore requested their advice, efforts, and support of the entire Gbiviwo (Citizens of Gbi) to accomplish the desired dream and aspirations of his people.

Togbega Gabusu said he was overjoyed by the commitment exhibited by everyone, who participated in diverse ways to make the ceremony a success.

Known in private life as Seth Kodzo Agbesinyale, Togbega Gabusu was born on March 16, 1980, married with three children, a former graduate of University of Professional Studies, Accra and currently a Senior Investment Officer at the Ghana Integrated Iron and Steel Development Corporation.

Togbe Keh XII, Left Wing Chief of Gbi and the Divisional Chief of Gbi-Wegbe, noted that following the performance of the royal transition rites of the late Togbega Gabusu VI in December last year, the way was paved for the search, nomination, outdooring, and enstoolment of a successor.

He said as part of the enstoolment rites, Mr Seth Kodzo Agbesinyale was confined on Saturday, June 4, 2022, and having gone through the confinement rites for seven days as per the Gbi customs, he was being out doored as Togbega Gabusu VII.

He urged Togbega Gabusu to unite the Area as he begins his reign and called on people of the Area to support the new ruler for their collective development.

Togbe Worde IV, the Acting President of the Gbi Traditional Council and Divisional Chief of Gbi Kpeme, expressed gratitude to the Agbesinyale family for giving out their son, while promising to support the newly Paramount Chief and asked the people to give their unflinching support to the new ruler.

He admonished Togbega Gabusu to always seek counsel from his elders and cautioned him not to give an open ear to negativity since all the Chiefs of the Area fully supported him.