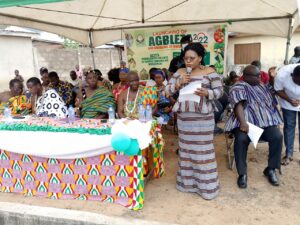 The Agbleza festival of the chiefs and people of Ziope in the Agotime-Ziope district has been launched with a call on the people to toil to place the festival on the tourism map of the country.

Madam Emelia Emefa Adzimah, the District Chief Executive, who made the call said strategic planning and hard work could yield this result if “We are poised collectively to do so.”

The Agbleza cloth was also unveiled at the event on the theme, Consolidating the Gains of Farming towards Our Development.”

She said a good repackaging of the festival to depict the cultural heritage and values of the area could serve as a pull factor towards making the festival popular in the region, country and globally.

She therefore urged the people to forge a common unity, devoid of decisive tendencies.

Madam Adzimah eulogised the importance of peace, a requisite for development, saying in the absence of peace all plans would remain as dreams urging the people to constantly remain peaceful.

She announced that the district was a beneficiary of government’s flagship programme dubbed Agenda 111 project for which the site was handed over to the consultant and contractor saying actual physical works is expected to start soon.

She spoke about other government interventions of the government such as planting for food and jobs, planting for export and rural development, one district one factory and one village one dam, many of these the district being a beneficiary.

The DCE reminded the gathering about the recent spike in covid-19 cases in some parts of the country and advised them to continue to adhere to the protocols with those yet to take the jab to do so adding the Monkeypox and Influenza are new arrivals.

Mr Charles Agbeve, Member of Parliament (MP) of the area said a well-packaged festival could be a good rallying point for socio-cultural and economic development and declared his full support to the festival.

He called on citizens of the area home and abroad to lend their full support to the festival to attract the necessary impetus.

Togbui Vizaze Adzaho, the Awadada of Ziope traditional Area is upbeat about improving the festival this year recounting the success of the previous one.