Toll booth workers to picket over unpaid salaries and reassignments 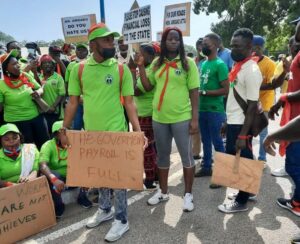 Ghana Toll Workers Group, has hinted of picketing at the Ministry Roads and Highways over their unpaid salaries and failure to reassign them.

The over 800 aggrieved former workers who manned toll booths across the country, said the Government had not paid their salaries since January 2022 and had also failed in fulfilling its pledge of reassigning them as stated in the 2022 Budget Statement.

Mr Edward Duncun, Secretary for the Group, in an interview with the Ghana News Agency, said, “It is sad to note that, almost six months after this promise was made by the Government, none of the over 800 workers have received a penny as salaries.”

“And as I speak to you, not a single soul has been reassigned as promised or has been given any form of employment. We are living in limbo, and we are preparing by Thursday to match or picket to the Ministry and demand our entitlements,” he added.

Mr Duncun said they had petitioned the Ministry some months ago, including the Speaker of Parliament, Majority and Minority caucus where the majority assured them of the Government’s commitment to pay salaries and fulfill its responsibilities.

He however said, the Government, since November 18, 2021 when the cessation of toll collection, had paid salaries for November and December, in 2021.

Mr Kwasi Amoako-Atta, the Roads and Highways Minister, directed the cessation of the collection of road and bridge tolls at all locations nationwide, effective 12am on Thursday, November 18, 2021, after Mr Ken Ofori-Atta had announced the closure of all tolls on public roads and bridges and in the 2022 budget statement.

He said the situation, coupled with the challenge to find alternative source of livelihood had brought untold hardship to them.

“It is therefore not surprising that some of the workers are harbouring suicidal thoughts as some have also been evicted from their homes because of non-payment of rent,” the Secretary added.

“As I speak, two of our colleagues have died without receiving their salaries, ” Mr Duncan added.