Hasaacas Ladies marched onto the pitch chasing to grab a fourth title to their laurels this season after winning the Women’s Premier League, FA Cup, and the WAFU Zone B tourney.

But, it was the South African side who made their intentions known from the blast of the whistle pressing for a goal. This yielded results when Chuene Morifi drew first blood in the 32nd minute with a brilliant touch from Andisiwe Mgcoyi’s cross from close range.

Sundowns did not stop there but continued to dominate on the field with their accurate passes to end the first half 1-0.

From recess, despite Hasaacas ladies’ push for a goal, the opponent’s proved too difficult for the “Dooooo” lads to penetrate.

33-year-old Mgcoyi added her name on the scoresheet to double the lead for her side, having capitalized on a defensive blunder to punish Hasaacas’ goalie, Grace Banwaa.

Hasaacas Ladies did not create chances in the game and the only brilliant chance came in 10 minutes to end regulation time when Perpetual Agyekum executed a fantastic free-kick a few yards outside the 18-yards box but her long shot was denied by Andile Dlamini with her terrific save.

The match ended 10 against 11 when substitute Regina Mogolola fouled Hasaacas’ Evelyn Badu, but the shortage could not give Hasmal ladies the upper hand over the South Africans.

Badu ended the two-week tournament as the highest goal scorer with five goals. 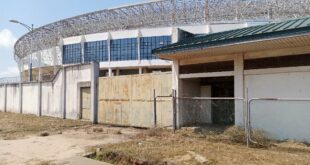