Scientists worried about the deteriorating state of Pra River

November 20, 2021 General News Comments Off on Scientists worried about the deteriorating state of Pra River 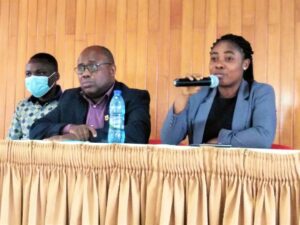 Scientists at the Meteorology and Climate Science Unit, Kwame Nkrumah University of Science and Technology (KNUST), have predicted frequent flooding in the south of the Pra River basin in the years ahead.

This is as a result of the increasing flood volume of more than 3,500 cubic meters per annum relating to the basin, the scientists said.

Besides, high variability in the rainfall pattern was also expected with more dry days in the basin, the scientists observed, after a study of the rainfall variability, which assessed the continuous rainy and dry days and the atmospheric conditions responsible for rainfall at the Pra catchment over the last 40 years.

Ms. Marian Amoakowaah Osei, a hydro scientist at the Unit, who was presenting the findings of a research work on the influence of atmospheric dynamics and spells on rainfall over the Pra catchment, in Kumasi, said human activities were responsible for the deteriorating state of the river.

It was important that stakeholders within the catchment area worked together to address the increased deforestation, illegal mining and settlement, land degradation and water pollution, she advocated.

“These activities have had dire consequences on the hydrological cycle over the catchment, increasing surface runoff, river flow levels, and coastal and urban flooding,” the hydro scientist lamented.

Ms. Amoakowaah Osei, a Doctor of Philosophy (PhD) Candidate, who has been working on the project in the last four years, with the assistance of other team members, including Professor Leonard Amekudzi, Provost of the College of Science, as well as Dr. Emmanuel Quansah, a micro meteorologist, said the water body played a critical role in the sustenance of Ghana’s biodiversity.

According to her, the team of scientists in the course of the study used a hydrological model (SWAT) to simulate floods and the factors that interplayed between rainfall and flood occurrence at the catchment.

“After that, we checked the expected rains from five to 100 years and the chances of specific flood volumes occurring again at various sub-basins of the Pra catchment,” she hinted.

In the estimation of the scientists, climate change was expected to have a severe impact on agriculture and water resources at the catchment.

The high cost of freshwater processing for human consumption was also envisaged due to increasing pollution and sediment load, Ms. Amoakowaah Osei argued.

The study recommends that for policy action, rainfall harvesting should be encouraged to reduce flood and aid climate-smart agriculture, construction of dams and reservoirs and strict enforcement of bye-laws, banning indiscriminate dumping of refuse in drainages.

Additionally, it is vital to desilt drainages before rain and flood onset and continuous training for staff of the National Disaster Management Organization (NADMO) on flood control.

The media is also expected to play an active advocacy role to reverse the deteriorating state of the Pra River, which has a total area of 23, 000 square kilometres, encompassing four regions of Ghana (Ashanti, Eastern, Central and Western).

Prof. Amekudzi, in an interview with the Ghana News Agency (GNA), on the sidelines of the presentation of the research findings, said it was important that the nation considered the cost-benefit analysis of mining as against the sustenance of the environment.

It was imperative that stakeholders protected the ecology and biodiversity in all their forms, he noted, saying there ought to be proactive measures instituted to protect the natural resources.

This is because mankind was dependent on the environment for survival, Prof. Amekudzi, a climate scientist, stated.

He called for increased investment in tree planting, especially in the face of the changing climatic conditions, which threatened the environment and humanity in general.

Dr. Daniel Norris Bekoe, the University Relations Officer, said the KNUST would not relent in liaising with the media to create the needed awareness on research works reflecting the needs of the society and solutions to challenges inhibiting sustainable growth.