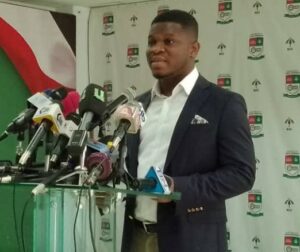 The National Democratic Congress (NDC) has urged government to immediately scrap all new and existing “nuisance” taxes on petroleum products to stabilise fuel prices in the country.

It also wants government to halt the free fall of the Ghana Cedi through prudent economic management to stabilise fuel prices, as well as prices of imported products.

Addressing a news conference on recent hikes in prices of fuel at the pumps in Accra, on Monday, Mr Sammy Gyamfi, National Communications Officer of the Party said, the introduction of some new taxes on fuel and the increase in existing ones were fuelling the frequent price hikes.

He explained that the introduction of a 20 pesewas Energy Sector Levy (ESLA) on every litre of diesel and petrol, the increase of 18 pesewas in ESLA per kilogram of Liquid Petroleum Gas, 10 pesewas sanitation tax on a litre of diesel and petrol, among others, as well as the free-fall of the local currency were major factors responsible for the persistent and steep increase in the prices of fuel products.

He said government must, therefore, ensure that these “regressive” taxes were removed to halt the rise in the fuel prices to bring respite to Ghanaians.

“More importantly, we wish to call on the Akufo-Addo/Bawumia/NPP government, to scrap some of the unnecessary taxes they have heaped on the price build-up of petroleum products so as to drastically reduce same,” he added.

Prices of crude oil and refined petroleum products have seen sharp increases on the world market, a situation experts say is due to a rise in demand for oil globally without a corresponding increase in supply, particularly from the Organisation of Petroleum Exporting Countries (OPEC) and its allies.

Mr Gyamfi also noted that the continuous existence of the Special Petroleum Tax of 46 pesewas on a litre of diesel and petrol was greatly affecting the stabilization of these products on the market.

The SPT, he said, was introduced by the Mahama-led administration in 2016 to shore up government’s revenue for development.

However, the National Communications Officer of the NDC explained that given that the export price of crude oil, currently, had increased from $40 to beyond $80 per barrel, which was far from government’s budgetary projection of $54.75 per barrel, it was unnecessary it to be maintained.

“This is particularly so, when government’s revenue from the oil sector for the second quarter of this year, went up by almost 60 per cent, equivalent to $89.1 million, as compared to oil revenue for the same period in the previous year,” he said.

On government’s removal of Price Stabilisation and Recovery Levies (PRSL) on petrol, diesel, and LPG for two months as part of measures to stabilise petroleum products, Mr Gyamfi, said the zero-rating of 14 pesewas and 16 pesewas per litre of diesel and petrol respectively were woefully inadequate considering the price of a gallon of these products which had increased close to GH¢10.00 within this year.

“In fact, given the fact that, the price of a gallon of diesel and petrol has increased by GH¢10.00 in this year, 2021 alone, it is an insult to Ghanaians for government to offer to reduce the price of fuel by a paltry 63 pesewas, which is the net effect of the zero-rating of the PSRL government has announced,” he said.

Government, through an advice from the National Petroleum Authority (NPA), removed the Price Stabilisation and Recovery Levies (PRSL) on petrol, diesel, and LPG for two months as part of measures to stabilise fuel prices.

The Association of Oil Marketing Companies (AOMC) in a statement issued on Friday, October 15, 2021, had also cast doubt on the impact of the removal of the PSRL for two months, saying it would not lead to a reduction in fuel prices in the next pricing window.