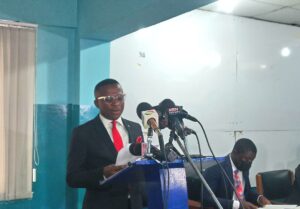 The aggrieved 499 candidates of the Ghana School of Law, who passed the 2021 entrance examination but were not offered admission, have appealed to President Nana Addo Dankwa Akufo-Ado to intervene in the stalemate.

Mr Tony Baah, the Lead Convener of the 499 Aggrieved Candidates, at a press conference in Accra, said they had petitioned the Office of the President on October 15th, to use his Executive Authority to come to their aid, in their quest for justice and to vindicate their fundamental human rights as enshrined in Chapter 5 of the 1992 Constitution of Ghana.

He said they were confident that President Akufo-Addo, who, for all intent and purposes, had proven to be a renowned human rights lawyer and freedom fighter, would rise to the occasion and do justice to their legitimate grievances.

“We appeal to the President, who also happens to a member in permanent good standing at the bar, to cause his official representative at the General Legal Council (GLC), the Attorney-General, Mr Godfred Dame, who is clothed with powers under the Legal Professional Act, 1960 (Act 32), to order the GLC and for that matter the Ghana School of Law, to comply with their own rules of engagement and within the confines of the law, by admitting the remaining 499 candidates who passed the entrance exams,” Mr Baah stated.

“This, respectfully, is not too much to ask for. It is the reason we voted for you, and we humbly beseech you to do exactly that.”

Mr Baah said the aggrieved 499 candidates to the GSL who passed the 2021 entrance exams were unjustifiably denied admissions to the school for some inexplicable reasons.

He said there was absolutely no debate that the minimum pass mark of admissions into the GSL was 50 per cent, which had been the case since the introduction of the entrance exams as a criterion for admissions to the GSL sometime in 2012.

He said there was equally no debate that the 50 per cent requirement meant that a candidate had obtained a cumulative raw score of 50 per cent from the two sections of the paper.

“Indeed, it is in accord with this that each year, the Independent Examination Committee (IEC) of the GLC only publishes the raw scores obtained by all candidates that sat for the exams, so that those who obtained 50 per cent from the published raw score, are automatically deemed to have been offered admissions,” he stated.

“And so, it was the legitimate expectations of those of us who sat this year’s exams, and indeed, every watcher of this space that the IEC/GLC will, in tandem with the consistent practice, published the raw scores of all candidates, upon the release of our results, so that, candidates who obtained the 50 per cent pass mark and over would be deemed to have passed.”

He said this legitimate expectation was fortified and vindicated by the publication in the Daily Graphic of May 14, 2021, made by the IEC/GLC, giving notice of the 2021 Entrance Exams, and inviting applications from qualified candidates for admissions to the GSL to pursue the professional law course.

Mr Baah said in section E(5)(iii) of the application, the IEC/GLC stated categorically that, ” Eligible Applicants who attained the minimum threshold mark set by the General Legal Council would be offered admission for the 2021/2022 Academic Year to pursue the Professional Law Course”.

Adding that this was also published on the official website of the Ghana School of Law.

He said the IEC/GLC on 28th September, purported to published what it termed a “pass list” containing the names of 790 candidates.

The Convener said this was meant to suggest that only 790 out of the 2,824 candidates who sat for the entrance exams (representing 28 per cent) secured at least 50 per cent mark, and, therefore, were deemed to have passed the exams.

He expressed surprise at the omission of the names of the 499 candidates from the admission list of the GSL.

He further appealed to Mr Justice Kwasi Anin-Yeboah, the Chief Justice, who doubles as the Chair of the GLC, and Mr Alban Bagbin, the Speaker of Parliament, and other stakeholders to add their voice in fighting the injustice.

He announced that some aggrieved candidates of the GSL would be embarking on a peaceful demonstration on Wednesday, October 20, in their quest for justice.