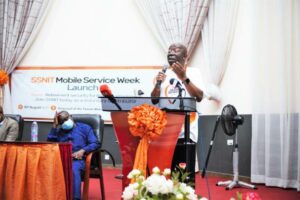 The Social Security and National Insurance Trust (SSNIT) is not for government workers alone, but rather all workers willing to join and contribute part of their legitimately earned income to secure their retirement, Dr John Ofori-Tenkorang, Director-General of SSNIT has said.

He added that “With SSNIT, you are not only saving towards retirement but also for contingencies; incapacity to work due to unforeseen situation.”

Dr Ofori-Tenkorang said this during the launch of the SSNIT Mobile Service Week in Tamale to woo the self-employed and informal sector workers to join the SSNIT to secure their retirement.

The event, held on the theme: “Retirement Security for the Self-Employed: Join SSNIT today as a Voluntary Contributor,” was attended by artisans such as sprayers, carpenters, masons, and traders, amongst other players in the informal sector.

A section of the population believes that SSNIT is for public sector workers alone, hence Dr Ofori-Tenkorang’s advocacy to clarify the issue to ensure that all workers, especially the self-employed join the SSNIT Scheme.

According to the Ministry of Employment and Labour Relations, only three per cent of workers in the informal sector belong to any structured social security scheme.

Also, less than one per cent of the 232,960 pensioners receiving monthly pensions from SSNIT were self-employed.

This means over the years, very few workers in the informal sector have signed on to the SSNIT Scheme or any other private scheme, thereby painting a very gloomy picture of the future of those workers, hence the move by SSNIT to woo the self-employed to join its Scheme.

Dr Ofori-Tenkorang encouraged the informal sector players to join SSNIT telling them “Know that one day, you will become old. You cannot continue doing what you are doing today. You will need support. Will you be ready? Why don’t you join SSNIT and insure your income?

He mentioned the four main benefits of the SSNIT Scheme as Old Age Pension, Invalidity Pension, Survivor’s Lump Sum Benefit and Emigration Benefit, and said the calculation of the SSNIT benefits was not complicated, adding it only depended on the amount of money you contributed and the length of period of the contribution.

Mr Mohammed Abdul Jawad, a Sprayer, who was a participant, said he was now convinced that joining the SSNIT Scheme was important and he would take the necessary steps to register as a contributor to secure his retirement.