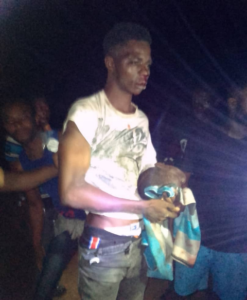 Dovi Tsidi, a 26-year-old resident of Mafi-Dove in the Central Tongu District of the Volta region has been arrested by the Aveyime police for allegedly beheading Kofi Kuzagbe Tsidi, a 12-year-old class six pupil of New Love International School at Mafi-Dove.

The main suspect, popularly known in the area as ‘Land Guard’ together with another two suspects, are currently in the custody of the Aveyime police to assist in investigations leading to the heinous crime.

Mr Moses Kwasi Awukuvi Danyevor, the Assembly Member for Mafi-Dove, in an interaction with the Ghana News Agency (GNA), said on Sunday evening at about 2040 hours, the suspect who lives in the same household with the deceased, took him to a lakeshore in the area called ‘Mlagoe,’ for unknown reasons.

Mr Awukuvi said an eyewitness, (name withheld), after hearing a series of screams at the shore of the lake, went further to know what was going on at that time of the night.

“He quickly rushed back to mobilise the town folks in an attempt to arrest the suspect after sensing danger in his first attempt, but the suspect had left the scene using a canoe that was at the shore of the lake together with the deceased,” Mr Awukuvi said.

He alleged that the suspect had drowned the deceased in a creek before committing the crime.

Mr Awukuvi further indicated that residents around the community were quickly informed leading to a search, after which suspect, Dovi Tsidi was found at a prayer camp called Shelta Pentecostal Ministry at Mafi Aflokope.

The GNA further gathered, the head of the deceased was retrieved in a maize farm near the prayer camp and the remaining body at the banks of the lake.

The suspect together with Flora Ekpe, leader of the prayer camp and a woman believed to be in her 70s is currently behind bars pending further investigations.

However, the prime suspect upon earlier interrogations by some aggrieved youths in the area after his arrest, said he was asked by the leader of the prayer camp to provide her with a human head.

The deceased, the GNA gathered, was among eight other children of his parents who were mainly into farming and petty trading.

Some residents in the area disclosed to the GNA they were living in fear and that “we are still in a state of shock over the incident”.

The Police in Aveyime have confirmed the crime which many described as a ‘ritual murder’.

Police Inspector, Prince Dogbatse, Deputy Public Affairs Officer of the Volta Region, who confirmed the incident to the Ghana News Agency, said investigations have been opened to delve further into the matter.