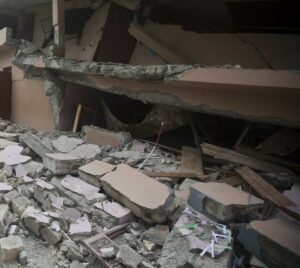 They arrive by foot and on the back of motorcycles, hobbling with open wounds and fractures, slumped over with unbearable pain after going days without medical treatment.

A week after a catastrophic 7.2-magnitude earthquake left at least 2,189 people dead and hundreds still missing in south-western Haiti, the injured and sick continue to stream in for help.

In one rural outpost, the care isn’t coming from a hospital, the government or international relief groups. The makeshift field clinic here was set up by a group of young Haitian doctors, all fresh out of medical school, who decided on their own to help. They pooled money for supplies and braved gangs and gunfire to get here from the capital, Port-au-Prince.

“Once we saw what happened, as young doctors, we were shaken,” said Ruben Misaac Pierre, 26. “We said, ‘We have to bring our assistance no matter what the circumstances are in Martissant.’ Even though there is insecurity in the country, we said, ‘We have to come help.’”

Martissant is the gang-controlled neighborhood at the southern entrance of Port-au-Prince, located on the main national road that links the capital with three of the southern regions of the country that have been devastated by the deadly August 14 tremor. Martissant’s violent gang clashes have made traveling by road to the damage zone a risky venture, one that has discouraged many from coming to help.

It did not stop these doctors. Just hours after the disaster, they had decided to take the long, risky ride to join other first responders in the quake-ravaged zones along the Tiburon Peninsula.

All friends, the volunteer group includes five doctors and a physical therapist, all in their 20s and recently graduated from the publicly funded State University of Haiti. They pooled their money together for supplies, Instead of a change of clothes, they packed bandages, antiseptic, gauze and medication.

What they couldn’t get donated, they bought and with no money to fly, they hopped aboard a public bus.

The night before the trip, word traveled that tensions were high in Martissant after a nurse and a doctor had been kidnapped while traveling in an ambulance in the area. It still wasn’t enough to dissuade them.

“We knew that Les Cayes needed help and we had decided to come give that help,” said Medgina Felix, 26.

Although Haiti is frequently a recipient of international help, the population also has learned not to sit around and wait for it. Just like in 2010 when after a major earthquake nearly destroyed Port-au-Prince, most of the first rescuers last week were Haitians. Neighbors were the first to search for one another through the rubble, using nothing but their bare hands and sometimes shovels. They shared food and water and others thronged hospitals looking to volunteer.

After a clinic in the city failed to pan out, someone told them about Marceline, one of the hardest-hit communities closest to the main town and the community of Camp-Perrin. The tip led them here: to a soccer field down a dirt path where a flattened Catholic school, Ecole Sainte Agnes, run by St Agnes Catholic Church and the pride of the community, serves as a tragic reminder of the devastation.

“We have people who are injured, we have people who have died, and these young doctors are here providing the help that we need,” said the Reverend Jean Edy Desravines, his voice resonating with pride.

The local priest, Desravines, was dealing with his own tragedy when he was introduced to the young physicians. On the morning of the quake, two women were at St Agnes cleaning the church when the ground began to roar. Both women died when the tremor brought down the church and all of its buildings, including the office where Desravines’ was.

He survived, he said, by crawling out of a small opening on top of fallen concrete blocks. Despite the devastation, he was grateful to welcome the doctors to the empty ball field in front of his fallen school. With a borrowed tent, a makeshift clinic went up.

With many in Marceline and surrounding rural communities lacking access to medical care, word quickly spread.

On Wednesday, as the group prepared to receive their first patients, local residents sat patiently in the open air waiting turns. A woman hobbling on crutches soon pulled up on the back of a motorcycle, her right foot bandaged up. Another needed bandaging.

Among the first patients was a little boy injured in the quake. As Thimothee Jean-Jacques, 28, bandaged his wound, Rose-Milord Celestin, the only physical therapist in the group, was trying to console him and quiet his tears.

“Come here, come here,” she said, holding him as his father also tried to reassure him.
Valentine Dejoie, 51, said she came to the clinic because her right foot, injured in the quake, has refused to heal.

“I didn’t think that this leg could be stitched,” a waiting Dejoie said.

Dejoie’s injury occurred when a church fell on top of her house, burying her, her 2-year-old grandchild and a cousin. The cousin died, but she and the child survived, Dejoie said, because a chair had wedged on top of their heads, blocking bricks from crushing them.

“The people of Camp-Perrin were hit very hard,” said Pierre, adding that they have treated “a lot of broken legs,” and seen a lot of head trauma.

In cases where the injuries are more severe, the group calls for someone to take patients to the local government-operated OFATMA Hospital. With their supplies already limited, they’ve started to run low and are in need of everything from potable water to gauze to medication. They plan to stay until there are no more patients or no more supplies.

By day, their borrowed tent is the clinic. At night, it’s where all six of them sleep. The sacrifice and inconvenience, they say, are worth it.

In recent days, the team has been joined by a group of university students who, with a similar desire to help, also left Port-au-Prince by bus and with supplies to come set up two white tents on the soccer field.

Also in their 20s, the second group includes a general practitioner, mental health specialist and psychology major among them. Like the young doctors, they were moved by their nation’s latest calamity and simply wanted to help.

They’ve distributed hygiene kits and also given treatment, said Duckerns Exume, 25, a psychology major at the State University of Haiti,

At the base of their mission, he said, is preserving the dignity of their fellow Haitians.

“Whatever support you are giving to someone you have to first always consider them to be people,” Exume said. “You can’t think you are better than them. The first thing is dignity.” Secondly, you can’t come up with the idea that you are going to create an organization.”

By Friday, both groups had seen hundreds of patients between them and had begun to collaborate. The doctors said they have referred some of their patients to the other group for mental health support.

Reflecting on the quake, Celestin, the physical therapist, said the experience had been humbling, painfully sad but also unifying.

The aftermath of the earthquake, she said, “is something that is devastating, something that is very sad that deeply touches everyone, especially those of us who are young in the country who have the object to also move forward when you see your fellow brothers and sisters.

“If we all move together, we will get there more quickly,” she said. “If we all try to move together and someone is hit, we have to stop and give a helping hand. It’s not something that affects just one group of people, it affects everyone.”