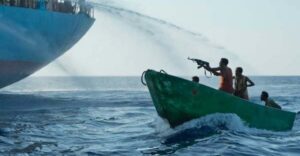 The world’s oceans continue to get safer for seafarers, new data showed on Monday, with the number of maritime pirate attacks falling significantly in the first half of 2021.

There were 68 pirate attacks and armed robbery of ships at sea, compared to 98 incidents in the same period last year, the International Maritime Bureau (IMB) said on Monday.

This year’s figure is the lowest since 1994, said the IMB, which is an agency of the International Chamber of Commerce.

Accordingly, 61 ships were boarded, four ships were attacked, two ships were shot at and one ship was hijacked.

Despite the overall improvement, hot spots for criminal activity remain.

The Gulf of Guinea in West Africa remains the most dangerous area and accounts for 32 per cent of all reported piracy cases. The region registered all 50 kidnapped crew and the single crew fatality recorded by IMB during the first half of 2021.

“IMB warns that fishing vessels have been hijacked in the Gulf of Guinea and later used as mother ships to target other merchant vessels,” an agency report said.

Sixteen pirate attacks were counted in the Strait of Singapore in the first six months of the year, five more than a year earlier.

Incidents off the coast of Peru have also increased two-fold over the same period, with nine incidents reported this year.

The IMB’s Piracy Reporting Centre is a central point of contact for reporting crimes of sea piracy and armed robbery.

Despite Ever Given blockage, Suez Canal reports higher revenue