Despite Ever Given blockage, Suez Canal reports higher revenue 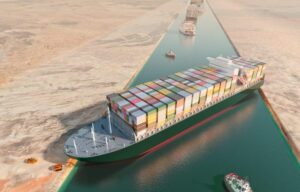 Egypt’s Suez Canal Authority (SCA) reported an increase in its revenues and number of ships crossing the waterway in the first half of 2021, despite a six-day blockage caused by the container ship Ever Given.

Some 9,763 ships passed through the canal between January and June, representing a 2.3-per-cent increase compared to the same period last year.

Revenues reached 3 billion dollars in the same period, which is 8.6 per cent higher than revenues reported in the first half of 2020, the authority said on Sunday.

SCA chief Osama Rabie said “flexible marketing and pricing policies adopted by the authority succeeded in maintaining the rates of ships crossing the canal and gaining the confidence of customers.”

The Panama-flagged Ever Given was refloated on March 29, six days after it ran aground during a sandstorm. It blocked the canal, disrupting traffic on one of the busiest shipping routes and causing ripple effects around the world.

The supertanker was released last week, ending a three-month stand-off over a compensation deal.

Legal representatives of the SCA and the megaship’s owners signed an out-of-court compensation agreement of an undisclosed value.