July 8, 2021 General News Comments Off on That was the best action we could take – Military on Ejura shootings 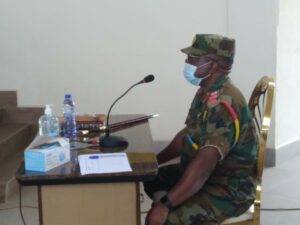 Brigadier General Joseph Aphour, the General Officer Commanding (GOC) the Central Command, Ghana Armed Forces, has told the Ministerial Committee probing the Ejura shooting incident that the action of the military was the best they could take under the circumstance.

He said but for the action taken by his men on the field, there would have been more casualties on that fateful day, alleging that some of the civilians were wielding guns.

“But for what we did, I bet you there would have been more deaths in Ejura,” he told the Committee on Wednesday.

Appearing as the third witness before the Committee Brig. Gen. Aphour said his men fired live bullets because they heard gunshots in the crowd.

Asked if it was part of the military’s standard operating procedure to fire live bullets during crowd control, he affirmed that when the need arise they were permitted to do so.

He said in situations where the crowd charged on the military after giving verbal and warning shots, the military could use live bullets to bring the situation under control.

He said the military had to step in with a minimum force as the rampaging crowd charged on the Police in the heat of the demonstration.

The Committee chaired by Justice George Kinsley Koomson is investigating the circumstances that led to the shooting of two civilians at Ejura, following the burial of one Ibrahim Mohammed, who was a social media activist at Ejura.

It was put together by the Interior Minister, Mr Ambrose Derry on the instruction of President Nana Addo Dankwa Akufo-Addo to get to the bottom of the tragic event.

More witnesses are expected to appear before the Committee on the second day of the hearing.