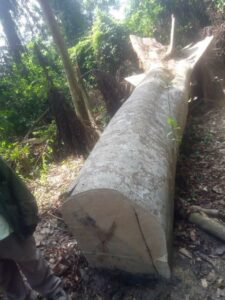 The Chiefs of Awutu Traditional Area have called on the Forestry Commission (FC) to help prevent the degradation of the Apra Hill Forest, which is their sacred sanctuary.

At a meeting between the Commission and Awutu Traditional Council at Awutu Bereku, Abokuadi Wyettey Agyemang Otabil III, Paramount Chief of the Awutu Traditional Area, said the wanton destruction of the Forest was unacceptable.

Giving a brief background of the forest, he said their ancestors sought refuge in that forest during a tribal war centuries ago when they were attacked by their enemies and it had since been their sacred sanctuary where they performed customary and traditional rites.

According to him, at a traditional council meeting in 1951, it was agreed that the forest should be managed by the Forestry Commission and it was finally handed over on March 2, 1959.

He said it was sad for the Commission to watch people encroached the forest despite several engagements to gazette the over 100 acre square forest, which is now left with only 25 acres square.

“Almost all the trees have been cut down and area is being used as a sand wining site,” the Paramount Chief said.

Obokuadi Otabil called on the FC to protect the forest, arrest and prosecute persons involved in its degradation.

“The Traditional Council is ready to support you in the steps you will take to reclaim the forest, protect it and manage it well before things get out of hand,” he added.`

Mr Oppong Sasu, Deputy Chief Executive Director of Forest Service Division, who led a team from the National Headquarters of the Commission, the Central Regional Office and Winneba District to the meeting, said the concerns and grievances were well noted.

He said the Aprah Hill Forest was in FC’s care for over 62 years and said the engagement was to see how best the Commission and the Traditional authorities could collaborate to stop the degradation.

“Nana, on behalf of the government, I assure you that we will do everything possible to protect the Aprah Forest in accordance with the 1992 constitution.”

He urged the Traditional Council to collaborate with the FC to achieve the needed result for the generation yet to be born to also enjoy the fruit in it.

In an interview with Nia Amponsah Duia, Safohen of the Traditional Area expressed disappointment of Asafo groups over the issue and appealed to the Commission and the Ministry of Lands and Natural Resources to apprehend the master-minds of the degradation.

“We are peace-loving people and are waiting patiently to see the action of the Commission, at reclaiming the forest as promised or we will not hesitate to advise ourselves,” he added.