Project dam washed away after downpour

July 8, 2021 General News Comments Off on Project dam washed away after downpour 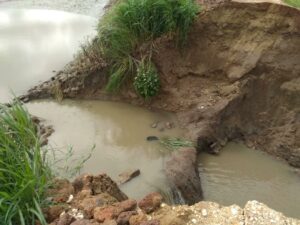 A Ghana Productive Safety Net Project (GPSNP) dam under construction at Loho in the Nadowli-Kaleo district has been washed away after a downpour.

The project, executed by the Galson Company, started in February 2020 and is expected to be completed in July 2021.

It was to rehabilitate an existing dam constructed about two decades ago to improve water retention.

Speaking to the Ghana News Agency (GNA) in Wa on Wednesday, Mr Benjamin Kobina Kunfiri Bukari, the Assembly Member for the Loho Electoral Area, blamed the incident on the delay in opening the dam’s spillway.

He said the situation was of great concern to the community as the dam would not be able to hold water during the dry season.

He said the dam served as a source of water for the community for dry season farming, an alternative source of income and livelihood.

Mr Bukari said livestock in the area also depended on the dam while some people also used the water for domestic activities such as laundering.

“You know people do gardens and farm around the dam, so the water swept away the farms,” he added and appealed to benevolent individuals, organisations, and the government to assist the affected farmers.

Mr Vitus Galaa, the Foreman in charge of the project, said the cause of the incident was not yet known and described it as “an unfortunate incident”.

“I am waiting for the project engineer so that we can know the cause of the incident. When something like this happens, there are always a lot of theories, but as I speak now the cause is not yet known”, he explained.

Some residents also raised concerns about the incident and said it would impact negatively on their livelihood during the dry season.