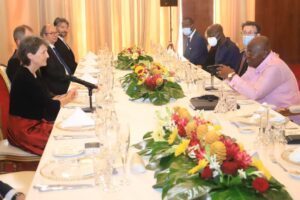 That is why he said, said Ghana was cooperating with the Swiss Government in the areas of energy, climate change, education, trade, among others areas of common interests.

The President said this when he hosted a former Swiss President, Simonetta Sommaruga, for a working lunch at the Jubilee House, Accra.

Madam Sommaruga, who is the current Swiss Minister for Environment, Traffic, Energy and Communications, is in Ghana as part of two-nation tour of Africa, which has also taken her Senegal.

President Akufo-Addo recalled the relations between the two states, which dated back to when Swiss missionaries settled in Ghana in the early days of Christianity in the country.

He said that country and its people had in no small measure contributed to what Ghana was today.

“We all know the very positive impact of Swiss nationals on our national development,” he stated. “They have a lot to do with the fact that, today, about 70 percent of Ghanaians are Christians…much of the initial work (Christianity) was done by the Swiss, Since then, we have had a strong relationship.”

The President also emphasised the dominance of Ghana’s cocoa in the relations between both nations, and commended the continuous interest of Swiss chocolate companies to purchase Ghanaian cocoa.

He expressed gratitude to the Swiss Sovernment for supporting Ghana to increase renewable energy, and was hopeful that with that cooperation, the country could achieve its goal of having at least 10 percent of renewable energy in its energy mix in the next decade.

On her part, Madam Sommaruga also lauded the longstanding, good and close contacts between Switzerland and Ghana.

She recalled President Akufo-Addo’s reciprocal visit to Switzerland in 2020, which according to her, had strengthened the bonds between the nations.

The Swiss Minister talked about the President about the Climate Protection Agreement signed between the country and Ghana, which would see Switzerland assume its responsibility in international climate policy.

It is the second agreement of its kind worldwide under the Paris Climate Accords (Paris Agreement). Switzerland concluded a similar agreement with Peru in October 2020.

Parliament is to soon ratify the agreement to pave way for its full implementation in Ghana.