The General Council of Trade Union Congress (TUC) of Ghana has urged the government to make good its commitment and pay the pension top-up for those who retired in 2020 without further delay.

According to the General Council those who retired in 2020 under the three-tie pension scheme, Act 766, retired with inferior lump-sum benefits, compared with what they would have received if they had retired under the old pension scheme-PNDCL 247.

In 2020, about 80 per cent of those who retired are entitled to lump-sum top-up which will merely bring them apar with the lump-sum they would have received under the old scheme.

“Government had agreed to top-up the lump-sum ts of these retirees. It is close to a year since the government committed itself to pay the top-up but they are yet to receive their lump-sum top-up,” a statement issued at the just-ended TUC General Council meeting said.

The statement said the delay in paying the top-up is causing severe hardships for those retirees and urged the government to honour its commitment to alleviate the hardships.

The General Council, the second-highest decision-making body of TUC noted that workers who will retire in 2021 and probably those who will retire between 2020 and 2025 will face the same inferior lump-sum benefits.

“The pension reform which gave birth to the current pension system was premised on the idea of enhancing retirement income of retirees.

” Government, with the support of all stakeholders, must ensure that these objectives are achieved. Otherwise, the reform should be reversed and all workers should return to the SSNIT Scheme for enhanced benefits.

“We repeat our call on stakeholder forum on pension. We foresee challenges ahead for pensioners, given the dire economic situation. We need to find a stainable way out of the pension debacle,” it added.

On limited coverage of the COVID-19 vaccination, the General Council urged the government not to relent on its efforts until the entire population is fully vaccinated.

The General Council, however, said it noted with concern that just about two per cent of the Ghanaian population is vaccinated.

“While recognising the challenge of securing vaccines, the Council urges government not to relent in its efforts until the entire population is fully vaccinated”.

It further reminded all Ghanaians to continue to observe all the COVID-19 protocols.

UNDP Rep calls for accessible and affordable insurance for all 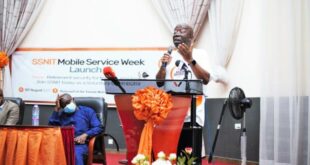 The Social Security and National Insurance Trust (SSNIT) has said as of March 2017, when …