GITFiC calls for the implementation of trade finance support programmes

May 26, 2021 General News Comments Off on GITFiC calls for the implementation of trade finance support programmes 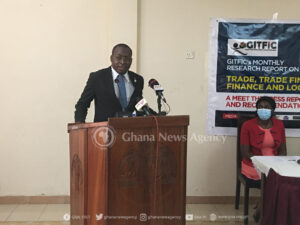 It said such programmes were necessary because they provided valuable credit and liquidity support for the intra-African trade.

The call was made on Tuesday during GITFiC’s Maiden Monthly Research Report on the topic: “The Role of Trade-Finance in the Successful Implementation of AfCFTA.”

Mr Gerald Woode, Lead-Research Fellow (Policy and Advocate, GITFiC) in his presentation of the May 2021 Report, urged Government to support regional integration by providing finance for intra-regional trade and issue partial portfolio-based guarantees to well-managed commercial banks to stimulate private-sector financial support to companies engaged in import and export activities.

Lack of access to trade finance had been one of the impeding factors to trade, specifically for small and medium enterprises (SMEs) across the continent, Mr Woode said.

“While several innovative development finance solutions have been introduced to address the challenge, many businesses still face limited access to trade finance mainly linked to perceived potential risks and losses.”

“In terms of opportunities, the elimination of inhibitive regulations under the AfCFTA is expected to ease cross border trade, enable capital and information flow, attract greater foreign and intra-continental investments, potentially increase capital funds, and provide a much larger customer base for financial institutions to serve,” he said.

According to him, an upsurge in trade finance was expected to ease cross border trade, enable capital and information flow, attract greater foreign and intra-continental investments, potentially increase capital funds, and provide a much larger customer base for financial institutions to serve.

He noted that even though the African Continental Free Trade Area (AfCFTA) provided opportunities for financial institutions to develop across the continent, it also posed a real test for the country’s financial structure.

Mr Woode opined that an effective and functional financial sector was fundamental for facilitating intra-African trade and growth.

According to him, the capability of Africa’s financial sector to execute the important task at the required scale to sustain the capacity of small and medium firms to contribute to and achieve the benefits of the AfCFTA remained unstable.

He said a high availability of trade finance could cushion the successful implementation of AfCFTA by “raising the floor” for global trade, despite downward pressure.

“Supporting the financial sector’s capacity to extend trade finance can also protect working capital when it is most needed. It can expedite post-pandemic recovery by providing the exact financing needed to restart business activities and renew trade,” he added.

The decline according to the World Trade Organization, was especially strong in North America and Europe accounting for a 15 per cent fall in trade for both regions as opposed to South America and Asia at a fall of 8 per cent and 11 per cent, respectively.

Mr Akpeloo attributed the main reason for the enormity of trade fall to the minimal role trade finance played.

He said the trade financing gap in Africa during 2011 and 2014 stood at $90 billion to $120 billion due to significant rejection of trade finance applications mainly due to weak client creditworthiness and inadequate collateral.

Despite the introduction of different development reform solutions to resolve the problem in Africa, Mr Akpeloo says many businesses still had limited access to trade finance, owing to concerns about potential risks and losses.

He called on Government to provide regional integration initiatives such as infrastructure projects to act as a catalyzer for other private sector agents.