May 6, 2021 General News Comments Off on Abossey Okai spare parts enclave to be decongested 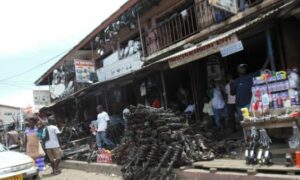 The Abossey Okai Spareparts Dealers Association has given people doing business at unauthorized places around the spare pare enclave 10 days to desist and find an alternative place to do their business.

Mr Clement Boateng, the Co-Chairman of the Association, at a press briefing, said for some time now their businesses had suffered in terms of patronage, because customers did not find it convenient do business at Abossey Okai.

He said the reasons given was that there were heavy traffic as a result of people selling in the middle of the road.

“Customers also complained that when they buy the home used parts, they do not last long and this has come about as a result of some of our boys picking discarded parts from various workshops, polishing them and re-selling to unsuspecting customers,” he said.

He said people from nowhere repaired vehicles on the road thereby damaging it and also leaving behind waste.

The Co-Chairman said those, who sell the used items (Ghana used) also dump the goods on the road which has just been constructed with the tax payers’ money thereby damaging the road.

He said it was due to the aforementioned reasons that the Executives were collaborating with the Ablekuma Central Municipal Assembly to embark on a massive decongestion exercise to sanitize the area.

“We are of the firm conviction that if this exercise is completed, sanity and discipline will be restored to the Abossey Okai Spare parts enclave,” he added.

Mr Boateng said their customers would also find it convenient to come and patronize their goods and business would bounce back.

He said the exercise was heavily supported by the Chiefs and Elders of Abossey Okai.

The Association, therefore, “lends it full support to the Greater Accra Regional Minister,  Mr Henry Quartey on his sanitation drive and the decongestion exercise”.

Madam Mariama Karley Amui, Municipal Chief Executive of Ablekuma Central, told the GNA that the Assembly would offer maximum support to the Association.