President cuts sod for construction of residential facilities for judges

April 21, 2021 General News Comments Off on President cuts sod for construction of residential facilities for judges 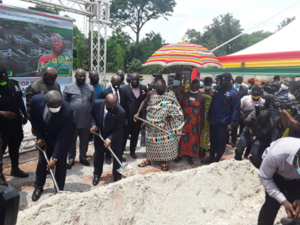 President Nana Addo Dankwa Akufo-Addo has cut the sod for the construction of  residential facilities for appeal court judges in Kumasi, estimated to cost GH¢76,575,937.00.

The 20-unit four bedroom town houses with boys’ quarters each, is expected to be completed in eight months, and being constructed within the Danyame enclave, a prime area in Kumasi.

There will also be the construction of a six-unit three-bedroom apartment with boys’ quarters each for directors and other administrative staff.

President Akufo-Addo said the establishment of a permanent court of appeal complex in Kumasi would help improve the justice delivery system for the northern sector of the country.

“Once completed, it means that appeals from Savannah, Upper East and West, North-East, Northern, Bono, Bono-East, Ahafo, Western North and Ashanti will be conveniently heard within a matter of period,” he said.

“Indeed the court of appeal moving from Accra to Kumasi, Tamale, Ho, Kofridua, and Cape Coast delayed the adjudication process and the associated financial implication of this arrangement had, over the years, been a great concern in the dispensation of justice,” President Akufo-Addo said.

He said the Government, through the Ministry of Local Government and the District Assemblies Common Fund, had commenced the construction of 90 courts with accompanying accommodation for judges across the country to address the inadequate infrastructure problem.

These structures are at various stages of completion.

The President said government would remain resolute to implementing policies to advance the rule of law and, thereby, reinforce the confidence of the people in the judicial system.

He commended the Asantehene, Otumfuo Osei Tutu, for providing land free of charge for the project and applauded the Chief Justice and his members for the dedicated roles they had played.

Justice Akwasi Anin-Yeboah, the Chief Justice, said the introduction of judicial reforms and the resultant need to implement various interventions to improve access to justice delivery necessitated the appointment of additional judges and magistrates.

The unfortunate thing, he added, was the unavailability of decent accommodation for those judges.

That had compelled court of appeal judges in the Bono, Bono-East and Ahafo regions to operate on an itinerary basis, which had adverse effect on justice delivery, he said.

Justice Anin-Yeboah commended the Government for approving the construction of the accommodation facilities and said it was going to improve the working conditions of judges.