Consultants who overpriced road projects will be prosecuted – Minister 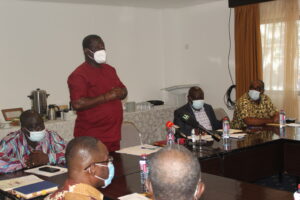 The Minister of Roads and Highways, Mr Kwasi Amoako-Atta has said any road consultant found culpable of overpricing road projects will be prosecuted.

Speaking at a stakeholder engagement in Accra with road consultants to chart the path towards the country’s road development, he said “President Akufo-Addo has expressed concern about the issue of project costing, where road projects are overpriced in the country. The President is concerned about the quality of work and value for money”.

Mr Amoako-Atta said the Ministry would not accept the lapses or inefficiency of any road consultants conniving with technocrats, either from the Ministry or other institution to do shoddy work, stating that “public funds must be used for the public good”.

The Minister earlier met road contractors and Regional Directors of Highways across the country in Koforidua for a workshop session to brainstorm on strategies to implement government infrastructural projects.

“The cost estimate per kilometre in Ghana is more expensive compared to other African countries. Why should the cost of a road in Ghana be costly than in South Africa? Road consultants must do due diligence and value for money in their project costing,” he said.

Mr Amoako-Atta said most of the project estimates were done by road consultants and technocrats but when problems arose, the Minister or the Politician would be blamed for the infractions.

He charged the consultants to be courageous and resist suggestions not in the interest of the nation, saying a “Minister has no power to dictate to your professional work”.

Mr Amoako-Atta, who is also the Member of Parliament for Atiwa West in the Eastern Region, said the government started the year by positioning itself in a strategic and stronger manner to deal with challenges in the sector, adding “government is determined to live a real legacy in the road sector”.

President Nana Addo Dankwa Akufo-Addo, in his State of the Nation Address in 2019, tagged the year 2020 as the “Year of Roads” and promised to embark on aggressive road development across the country.

The President, delivering his inaugural speech after being sworn in to commence his second tenure in office, pledged to prioritise road construction in 2021 to ensure that a significant number of kilometres across the country were tarred.

All these commitments, the Minister said, could not be achieved without the support of all stakeholders in the sector, stressing “we must be determined to move together to work together to achieve success in our endeavours”.

He said road consulting services played a critical role in the success of government agenda on roads and charged the practitioners to be professional in the discharge of their duties, by supporting and safeguarding the interest of employers.

Mr Amoako-Atta touted the achievements of the government in the first term, adding that the sector had witnessed a transformational impact in the transportation sector.

“The development of our road sector will open up the country and lead to the creation of a more connected society to help realise the goal of regional and continental integration,” he said.

He commended consultants who had worked tirelessly since 2017 to achieve the government’s road infrastructure agenda and pledged to address their challenges for the growth of the sector.

Mr William Desbordes Albert Viala, the President of Ghana Consulting Engineer Association, commended the Ministry for the engagement and expressed the hope that the meeting would come out with working documents for a win-win situation.

He assured the government of the Association’s resolute commitment to work to address the bottlenecks in the sector and ensure value for money on all road projects.

Facebook Twitter WhatsApp LinkedIn
2021-04-21
Theodora
Previous Court orders arrest of four for failing to appear before it
Next Kotoko, GFA in a legal tussle over Konadu’s settlement