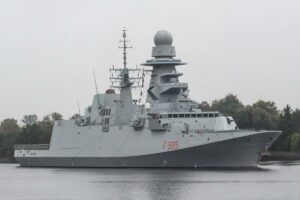 Soldiers on an Italian warship, Luigi Rizzo, that berthed at the Tema Port are to train Ghanaian Navy personnel to fight the rising piracy cases on the Gulf of Guinea.

The 187 soldiers are expected to undertake a midnight drill with their Ghanaian counterparts in patrolling and surveillance methods in the combat of piracy.

According to reports, there were more than 200 cases of piracy in the Gulf of Guinea in 2020, involving kidnapping and demand for ransom.

Commander Dario Castelli, Commanding Officer of the Luigi Rizzo warship, briefing the media at Tema, said there was the need for such collaborations between Italy, and Ghana, as well as other African countries in the training, to send a strong signal to the pirates.

He said the warship, which was offering monitoring and surveillance on the Gulf of Guinea for some months now, was expected to return to Italy in May after the joint operations.

The ship is also expected to hit the gulf in October this year to undertake similar monitoring and surveillance exercise.

Soldiers beat up members of Coalition of La Youth Associations

Shankiki, a 30 year old believed to be an accomplice in the Takoradi murder and …