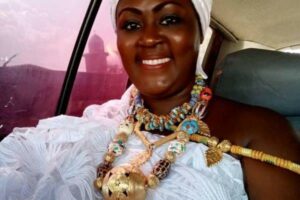 Women have been urged not to allow unnecessary pressures from society to prevent them from quitting abusive and bad marriages.

Describing domestic violence in marriage as barbaric, unfortunate and unacceptable in the Ghanaian society, Nana Anima Ahwenepa, the Queen-mother of Dwenase indicated divorce remained the best option for victims of abusive marriages.

In an interview with the Ghana News Agency (GNA) at Dwenase near Bomaa in the Tano North Municipality of the Ahafo Region, the Queen-mother said domestic violence was a worst form of human rights abuse and women must not be allowed to go through such physical and mental torture in marriage.

Instead of helping spouses to solve marital problems, Nana Ahwenepa, also the Founder and Executive Director of Naky Foundation, a non-governmental organisation, expressed regret that many families and churches impressed on women to stay and go through several forms of human rights abuses in their marriages.

Naky Foundation works to seek the general well-being of vulnerable women and girls in society.

Nana Ahwenepa noted many women in the country were left in traumatic condition, which affected them psychologically because of domestic violence and abusive marriages, saying victims sometimes had no other option than to stay in such bad marriages because of religion, faith and family pressures.

“You could easily see some married women and know they are not happy in their marriage. Some are going through serious mental and physical tortures but they cannot divorce because of religion and faith issues. This is extremely unacceptable and must not be allowed to continue in the Ghanaian society,” she stated.

“Only victims know exactly what they are going through and it would be unfortunate for their families and churches to insist on them to stay without helping them to restore peace back to the marriage,” the Queen-mother added.

Marriage in the Ghanaian traditional perspective, Nana Ahwenepa explained, was an agreement between the husband and the wife, noting if such union failed to work, then there was no need for families to allow both of them to continue, because most often, the women suffer the consequences.

“For marriages to work, men should regard their wives as helpers and younger sisters. If men see they cannot co-exist with wives any longer, then the best option was to send them back to their families instead of abusing them physically and emotionally”.

“Marriage is not a mutual union between boys and girls, but rather reserved for the matured in mind,” she said adding that, the youth must not rush into it. They need to prepare themselves well both financially and emotionally for their marriages to work in the interest of society and their unborn children.