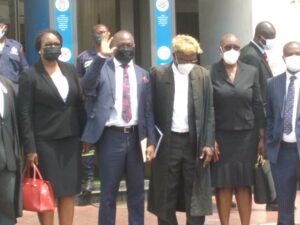 The Supreme Court on Thursday discharged Dr Dominic A. Anyine, a member of the Petitioner’s communication team, of contempt charge.

He was said to have stated that the Supreme Court had a “predetermined agenda” to rule against the petitioner.

On February 22, this year, the Supreme Court conducted contempt proceedings against him and ordered him to retract the comments before Thursday, February 25.

Chief Justice Kwasi Anin Yeboah, presiding during sitting on Thursday, stated that his colleagues on the panel informed him that Dr Ayine had retracted the comments.

The Court commended Dr Ayine for being candid and not prolonging issues.

Mr Frank Beechem, Counsel for Dr Ayine, lauded the Court for its magnanimity, adding, “We will sin no more.”