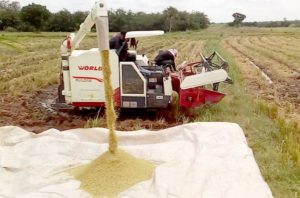 Mr Francis Ennor, the Upper East Regional Director of the Department of Food and Agriculture (MOFA), says the Region needs 20 combine harvesters to boost services to rice farmers, who annually lose their harvest for lack of the machines.

He said the Agric Directorate had no combine harvester and farmers depended on scarce services of private entrepreneurs.

He said the Region needed combine harvesters to support rice farmers in their cultivation and the Region’s closeness to the North East and Savannah areas, known for rice cultivation, was an added advantage.

Mr Ennor said this in an interview with the Ghana News Agency in Bolgatanga in response to the annual challenges of rice farmers and the absence of some mechanization services during the farming season.

The Regional Director said government acknowledged the challenges and called on private entrepreneurs to increase the number of tractors and combine harvesters in the Region to provide the services.

He said the directorate of crop services had procured reapers of which 15 would be allocated to the Region for demonstration purposes.

The reaper is a simple and easy to handle machine used for harvesting rice and works well in water logged areas, he said.

He said the reapers were procured and promoted by government to support farmers to buy and pay in installment.

“Three will be allocated to the Builsa South district, two to the Garu district and eight to other districts.”

He said vibrant groups and associations, particularly women, youth and men with collective voice and good financial records, would be assisted to acquire such equipment for farming activities, especially harvesting of rice.

“We are encouraging private investors to buy such machines to run as business to support farmers; no one in such a business will run at a loss,” the Director said.

He said good land preparation was necessary for combined harvesters to work effectively, since such machines needed careful management.

“For land preparation, if you are able to plough your land well, harrow it and do the leveling well it becomes easier for a combine harvester to work.”

To this end, Mr Ennor said the Savannah Zone agricultural productivity Improvement Project (SAPIP) under MOFA had this year started the development of more arable land for cultivation.

He said 1,300 hectares of land was prepared last year and was already in use for commercial rice, maize and vegetable cultivation.