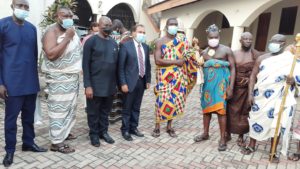 The visit was also to discuss ways to collaborate at the regional level for investments and development.

The visit formed part of his five-day tour of the Eastern Region, and discussions centered on how India through the friendly bilateral relations with Ghana could scale down its investments in the region to create job opportunities as well as improve the local economy.

Mr Rajaram said Africa and for that matter, Ghana was well endowed with natural resources across all the regions and indicated that India was ready to focus on agriculture at the regional level with high levels of technology for the mutual benefit of the two countries.

He said the other potential areas in the region that his visit would look at would be technology for irrigation purposes, water supply systems, and renewable energy.

Daasebre Oti Boateng, the Omanehene and former Government Statistician expressed his appreciation to the Ambassador for the courtesy call and said he looked forward to establishing a long standing relationship with the people of India.

He explained that the root-based institutions in New Juaben were set to venture into neem production and called on the Indian government to collaborate with the institutions to help develop and promote the indigenous herbs.

The Indian High Commissioner later held a reception for students who had benefitted from the Indian scholarships and higher learning opportunities as well as members of the Ghana Journalists Association to brief them on the agenda of his visit to the region.