In December 2020, the Open Oil did an analysis of the controversial Agyapa deal and established that the value of the shares reached by the Ghana government is low, and asked that the government made the model used to arrive at that value available for public scrutiny.

Ghana’s Parliament during the last days before it went on recess in 2020, approved some agreements under the Minerals Income Investment Fund (MIIF) which included the Agyapa deal.

Approved on Friday August 14, 2020, the Ghana government by that agreement is using a Special Purpose Vehicle (SPV), Agyapa Royalties Limited, an offshore company incorporated in a tax haven – Jersey, in the Channel Islands of the UK to deal in Ghana’s gold.

The government by the terms of that deal says it will own 51 per cent of the shares of the company and the remaining 49 per cent will be floated on the London Stock Exchange.

Agyapa as part of the deal is expected to raise between $500 million and $750 million upfront for government to use for development. The government says it needs the money to invest in education, primary capital, health and infrastructure.

Shareholders of Agyapa Royalties will however keep future revenues from gold royalties instead of the revenue going to government or the Mineral Investment Fund.

The deal with Agyapa, will be under the Mineral Development Fund Act, 2018 (Act 978) and its amendment Act.

The government following public outcry has suspended the deal, which a later risk of corruption and anti-corruption risk assessment report of the Special Prosecutor concluded that there is no guarantee that the minerals income royalties being ceded to Agyapa Royalties Limited without a national consensus is not and will not be a leaking pipe in the public purse.

The Open Oil, which describes itself as a leading provider of financial analysis and commercial advice to governments and other public entities around the world, says based on a discounted cash flow financial model, their analysis concludes that the guidance range for the value of 49 per cent of Agyapa shares, of between $500 million and $750 million, looks to be low, and the shares undervalued.

In the analysis copied to ghanabusinessnews.com, Open Oil argues that since the value of the shares in 2020 depends on estimates of future royalties, and the royalties are directly tied to sales, one key metric is what price of gold would trigger what valuation. It indicates that the model it used suggests that a valuation of $500 million is supported by a gold price of $749 per troy ounce, while the upper bound of $750 million is sustained by a valuation of $1,086.​ 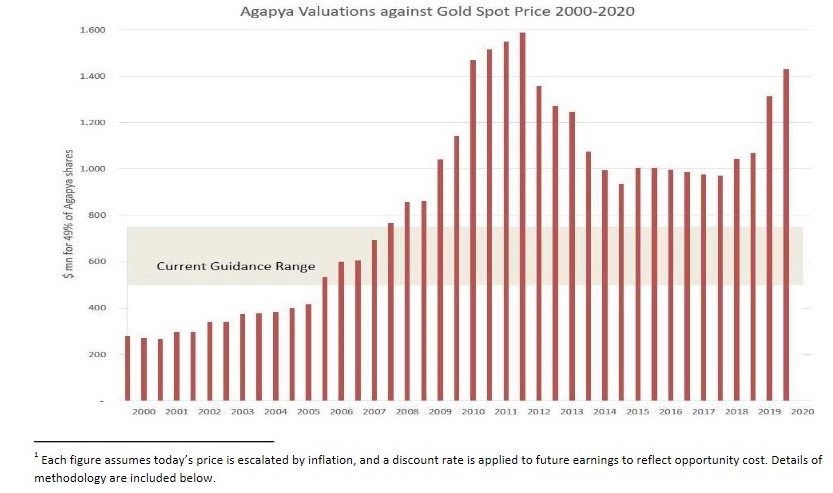 Open Oil notes that gold, like all commodities, can vary in price over time, and is subject to structural changes in supply and demand. Nevertheless, the spot price of gold has been higher for the last decade.

According to the Open Oil model the Agyapa 49 per cent valuation, if made on the spot price of gold today​,​ could be worth $1.47 billion, this number is comparable with the valuation known by Parliament members.

The analysis cited Yaw Buaben Asamoa, a former Member of Parliament and communication director of the New Patriotic Party who declared in September 2020 that, “the market capitalisation of Ghana’s gold is expected to be between $1.5 – $2 billion”​, although it is unknown if his estimations are based on a government internal model or another source of information.

Open Oil further states that some civil society organisations​ have suggested a “value of the royalties for the assets under consideration is between $2.5 billion to $3.5 billion”, without detailing whether their valuation takes into account the 100 per cent of royalties or the 49 per cent that is meant to float in the international market.

According to Open Oil, there are inevitably margins of uncertainty in the model. Some are based on the need to predict future events such as price and production, some on interpretative questions to which there is no single right answer, and some based on information which is incomplete in the public domain. Nevertheless, resolving such uncertainties to the extent possible is unlikely to change materially the conclusion that the valuation guidance range currently looks low.

It states that the future production profile of the mines is the area where new information could help the most. Production estimates from mines whose royalties would flow to Agyapa, for example, is initially based on historical data provided by the country’s EITI reconciliation reports since 2009.

“For the future, the base scenario assumes a slow decline in production in the sector as a whole over the next two decades. If decline were faster, the valuation would naturally come down, but the question is by how much. Sensitivity analysis shows the sector would have to suffer a catastrophic collapse and production halve instantly for the valuation to come down to $500 million,” Open Oil argued.

It added that the discount rate used to put the value of future earnings into today’s money is 5 per cent, typical for project finance loans, and above rates that would normally accrue on stable securities.

The main assumptions of the base scenario in the model are as follows:

“Since the issue is of such pressing public concern, we recommend that the government provide further precise information, to minimise such uncertainties.

The model which underlies the analysis in this paper is published under a Creative Commons license​​​,so that it can be interrogated, and improved if better information comes to light. We recommend the government does the same with its own modelling for Agyapa,” it said.