EC to initiate process to create new constituency in Guan

December 21, 2020 General News Comments Off on EC to initiate process to create new constituency in Guan 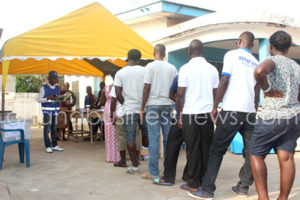 The Electoral Commission (EC) has disclosed that it will initiate processes leading to the creation of a new constituency in the Guan district when the 8th Parliament commences.

At the just-ended general election, the EC could not hold elections for registered voters in the Guan District to elect a Member of Parliament due to the absence of a constituency.

A source at the Electoral Commission told the Ghana News Agency that the EC was unable to create the Constituency because the CI needed to create the constituency, could not have matured in the 7th Parliament.

Parliament went on recess on November 9, for the December elections and resumed on December 14.

The source said The EC could not lay the Constitutional Instrument (CI) for amendment of the creation of Constituencies because the 7th Parliament could not sit for 21 days before its dissolution at midnight, January 6, 2021.

“The C I to be laid will have to stay in Parliament for 21 sitting days and come into force if 2/3s of Members of Parliament allows its journey. It is after the passage of the amended C I that the EC can contemplate the holding of any election in that created Constituency,” the source said.

The EC noted that the Supreme Court had ruled on when elections could be held in a newly created Constituency.

“It was not a deliberate attempt by the EC to deny the people of representation in Parliament. They could not have voted to elect an MP because it was not legally right for an MP to be voted for by two different districts,” the source said.

“By law, if a new constituency is created they have to join the new parliament, and whether the people will have a representation or not in the 8th Parliament, it will be another huddle. As a Commission, we will do our part and leave the rest to the judicial process”.