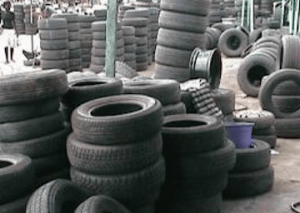 Even before the commencement of trading in January 2021 under the African Continental Free Trade Area (AfCFTA), a number of investors have shown considerable interest in investing in the Ghanaian economy. Among the several sectors and areas of investment of particular interest is the automobile sector. Indeed, automobile companies such as Toyota, Sinotruck, Nissan, Volkswagen have shown interest in the Ghanaian economy and with the latter actually opening an assembly plant in Ghana in 2020.

Toyota also recently announced the acquisition of a license to commence a vehicle assembly business in mid-2021 with an initial investment of $7 million.  In order to create the needed environment to support this industry to thrive, the Government of Ghana developed the Ghana Automotive Development Policy and amended the Customs Act, 2015 (Act 891) which prohibits the importation of salvaged and used vehicles older than 10 years. Implementation of the amended Act in November 2020 however has been put on hold pending further consultations with stakeholders. Under the Ghana Automotive Development Policy, a number of incentive schemes including tax holidays, exemptions of import duties and related charges have been instituted to promote the growth of the automobile industry which is one of Government’s strategic anchor industries.

Clearly, what is heightening the interest in the Ghanaian economy besides the conducive business environment created and the stable democracy the country enjoys is the desire of investors to use Ghana as a hub to export to other part of the continent under the African Continental Free Trade Area (AfCFTA). The AfCFTA has been signed by 54 of the 55 African states to create a single duty-free and quota-free internal market of 1.3 billion people and a combined GDP of $3 trillion.

The automobile value chain is very broad with a number of opportunities for Ghana to tap into given its comparative advantage. One key area which the country must focus on is in the manufacturing of tyres. Due to the rising middle class in Ghana, there has been an upsurge in the importation of vehicles creating a complementary demand for tyres. Vehicle, which is one of the top five imports into Ghana, was as high as $1,872 million in 2017 before marginally reducing to $1,692 million in 2019. Vehicle imports which has increased by 111 per cent from 2006 to 2019 has in turn created a growing market for different types of tyres including passenger car tyres, industrial tyres, truck, trailer and bus tyres etc.

Ghana’s import bill for tyres has grown over the years. The value of imports of tyres increased from $136 million in 2015 to as high as $178 million in 2019, effectively indicating that the market has the potential to grow in the coming years. This growth is largely accounted for by increases in the import of new pneumatic tyres. This increasing trend is equally reflected in the overall imports of tyres into Africa. Africa’s import of new pneumatic tyres in 2019 for instance was 4,027million with Ghana being the tenth largest importer. 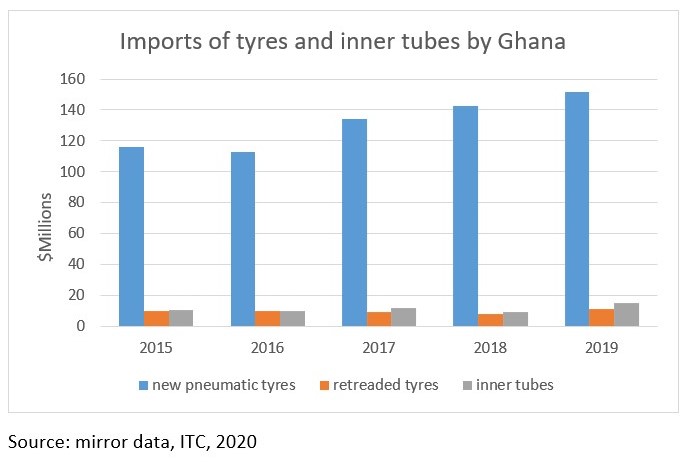 Notwithstanding the high volumes of tyres that Africa and indeed Ghana imports, the country has the potentials for manufacturing and supplying tyres on the continent. This stems from a number of reasons. First, the countries climatic conditions are suitable for the cultivation of rubber from which tyres are manufactured. Currently, there are a number of rubber plantations that can be leveraged to commence the production of tyres. The Ghana Rubber Estate Limited (GREL) and the Rubber Plantations Ghana Limited (RPGL) are the largest and second largest producers of rubber in Ghana respectively. By cultivating its own rubber planting and employing the outgrower scheme, GREL has increased rubber production from 18,000 tons in 2012 to over 40,000 tons in 2017. RPGL on the other hand has a nursery with a capacity of 1,000,000 plants and as at 2016 has a land holding of 4000 acres and an outgrower of 5000 acres. GREL exports 95 per cent of the rubber produced. The Ghana Export Promotion Authority in its National Export Development Strategy launched in October 2020 recognized the need to add value to the country’s natural rubber which is currently exported in its raw form. 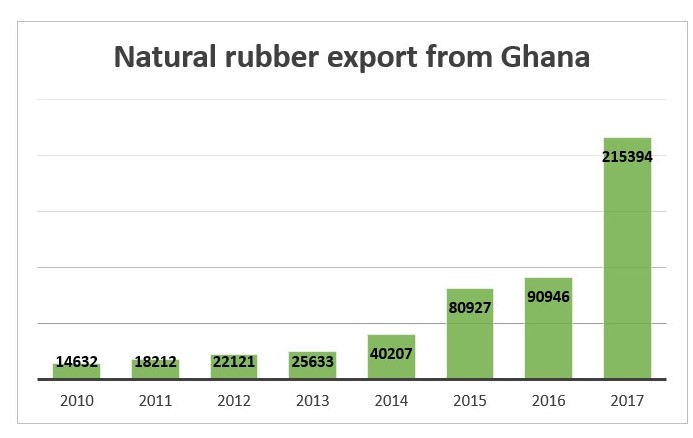 The three major components for tyre manufacturing are natural and synthetic rubber, carbon black, wires, zinc oxide and other chemicals. Some of these inputs in particular carbon black are byproducts that can be derived from the country’s petrochemical industry. Therefore, Ghana is in a position to supply natural rubber, carbon black and other petro chemicals as raw materials for the tyre industry

A brief history of tyre manufacturing in Ghana

Attempts were made by successive Governments to revive the factory in the 1990s but have not yielded any meaningful results. A report by the African Development Bank (AfDB) in 2000 indicated that the Government of Ghana secured a $25.8 million loan from the AfDB in 1990 to rehabilitate the tyre factory. The project was aimed at rehabilitating, refurbishing and overhauling the existing equipment as well as training the technical personnel in order to increase the production levels to 1,231 tyres per day or about 350,000 tyres per annum based on 280 working days in a year. However, this could not be accomplished due to weak management, and the inability of the Government of Ghana and BTC to come up with their matching funds.

If there is any time to start investing in the manufacturing of tyres in Ghana, it is now. There is a growing middle class with unfettered appetite for vehicles. Hence, establishing a tyre manufacturing company to serve this huge market is a viable investment to undertake. Engaging the private sector to revive the tyre manufacturing sector is important as this will ensure its sustainability.

Besides the jobs this factory will create, opportunities for more smallholder farmers including women to go into the rubber plantation would be abundant. Rubber plantations are good avenues through which many of the teeming youth could be engaged in to make a living. This is more sustainable as it takes 5 years for rubber plantations to mature and could be harvested for over 30 years.

Tyre manufacturing should be prioritized under the government’s one-district-one-factory initiative. This will help reduce the initial cost of investing in this industry and go a long way towards making Ghanaian tyres competitive on the market. The need to reduce cost of production in the country is key since Ghanaians and indeed Africans are price sensitive. It is important that the government look for investors to revive the defunct Bonsa tyre factory or build entirely new factories whiles providing adequate support for farmers and companies such as GREL and RPGL to increase production of rubber for the factories. Since Government is the largest consumer, a national policy to encourage government agencies to purchase made-in-Ghana goods is imperative in order to sustain its industrialization efforts.

With the right government interventions coupled with effort to reduce the cost of doing business, it should be prudent to produce tyres in Ghana. Currently, import duty for new and retreaded tyres and inner tubes ranges from 10 per cent to 20 per cent. The welfare and economic gains from producing tyres for the domestic and export market will boost the economic development efforts of the country.

As indicated in the Government’s National Export Development Strategy document, it is important that work on the policy document to streamline the policy related issues in the rubber sector so as to promote value addition is expedited by the Ministry of Trade and Industry. This will be useful in understanding the support and legislative framework needed to promote the development of the sector.

Ghana must adequately explore the African tyres market by reviving its tyre factory and establishing new ones to take advantage of markets such as ECOWAS and the much larger and upcoming African Continental Free Trade Area (AfCFTA).

The author is an International Trade Expert

Ghana’s Fourth Republican Parliament was born on January 7, 1993 when the country returned to …