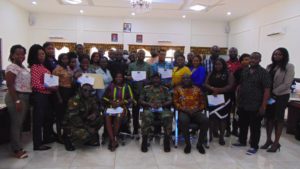 The Ghana Armed Forces, (GAF) as part of its preparation towards the December polls, has trained journalists in military reporting.

The one-day workshop which brought together about 20 Journalists, formed part of GAF’s “Operation Peace Trail” ahead of the general election.

Lieutenant Colonel Godwin Alexander Azara, Deputy Director, Land Operations, GAF told trainees that the military would deploy 6,000 troops throughout the country to ensure a conducive environment for the elections.

He said the role of GAF was to provide backup support to the Ghana Police Service hence the troops would be on standby.

He said the team, made up of personnel from the Army, Navy and Air force would be properly dressed in their respective uniforms on all operations.

He informed that the deployment would begin on December 4 across the nation and would withdraw men on December 15 if there was no run off.  “In the event of a run off, the personnel would be withdrawn on January 10, 2021.”

Colonel Aggrey Quarshie, Director, Department of Public Relations, GAF, said the Military would ensure the safety of the general public and asked the citizenry not to panic at their sighting but cooperate with the officers for a peaceful election.

He advised the media to report ethically and avoid misleading information by fact checking before publication.

Participants were presented with certificates.

Police round up 215 suspects up in post bullion Van attack

The Accra Regional Police Command has embarked on an enhanced operational exercise in Accra, arresting …