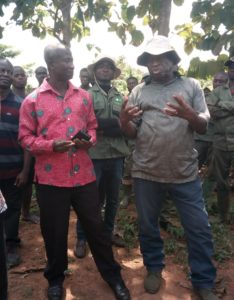 Brigadier-General Joseph Odei (Rtd.), the Board Chairman of the Forestry Commission (FC), has entreated teachers and heads of schools to make tree planting and forest protection part of their teaching syllabi and to inculcate that habit in their pupils and students.

He said forest preservation was vital because trees played a major role in diverse ways of human lives, saying besides provision of fresh air for breathing and preventing climate, the value of trees had so many economic values for national development.

Brig. General Odei (Rtd.) made the appeal when the FC Board interacted with Mr Anthony Nimako, the Headmaster of Bormaa Senior High School at the School’s afforestation project site under the Ghana Forest Investment Programme (GIFP) at Bomaa in the Tano North Municipality of the Ahafo Region.

He said the youth must be trained to become responsible future leaders to continue and expand the afforestation projects being carried out currently at various locations in the country.

But that could be achieved if the habit of sustainable environment and development was deeply inculcated in them, Brig. General Odei (Rtd.), added.

The meeting was to mark the end of a two-day inspection tour of the FC Board to ascertain the progress of government’s afforestation programmes and sites in the Bono and Ahafo regions.

The Board proceeded on Friday to the Ayum Forest Reserve hosting more than 20 varieties of tree species and the Apirapi Forest Reserve in the Bechem Forest District.

The species cultivated included Gmelina, Cassia and Teak planted by the employees under the YAP and other individual farmers engaged from the forest-fringed communities.