November 7, 2020 General News Comments Off on About 1,200 seized illicit firearms destroyed in Sekondi 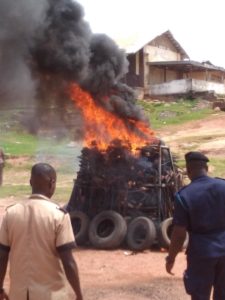 The National Commission on Small Arms and Light Weapons on Thursday destroyed a total of  1,194 confiscated small arms in the Western and Western North Regions, as part of efforts to create awareness on the dangers of illicit arms.

Mr Jones Applerh, Executive Secretary of the Commission said from 2005 to 2018 the Commission in collaboration with the Ghana Police Service, Armed Forces, and other security agencies had seized and destroyed 10,052 illicit small arms.

Mr Applerh said the exercise was intended to prevent small arms from entering the country and that the management and control of ammunition should be given much attention by the relevant state institutions in addition to the right policy interventions.

He commended the hard work of the security personnel at the nation’s borders in arresting criminals and preventing weapons smugglers from smuggling their weapons into the country.

The Executive Secretary said the government was providing scanners, CCTV cameras in Accra, patrol vehicles among others to enhance the operation of the various security agencies and ensure public safety and security of all persons living in the country.

Mr Applerh however said the government’s efforts alone would not be enough if citizen failed to play their part by volunteering information to the security agencies and called on all Civil Society Organizations, traditional leaders, the media, and the general public to rally behind the Commission’s effort in fighting arms proliferation in the country.

“I call on all Ghanaians to uphold our unique values of brotherliness, patriotism, and peaceful co-existence as we approach election 2020.”

Reverend Professor Paul Frimpong Manso, Board Chairman of the Commission, pointed out that weapons destruction exercises are used to draw the attention of the public to the scourge of illicit trade in small arms and light weapons.

“The proliferation of small arms and light weapons inflict a lot of needless human deaths and suffering especially among women and children and also derails development and destabilizes societies”.

Prof.Manso pointed out that small arms and light weapons are the tools that sustain and prolong conflicts, adding that they are used to commit high-level armed violence and aid terrorists, armed groups among others.

“The proliferation of small arms and light weapons and easy accessibility by civilians pose a major security threat to our democracy and socio-economic development.

The board chairman said Ghana has been ranked the most peaceful country in West Africa by the Global Peace Index and the 3rd in Africa and is also described as a beacon of democracy in Africa, stressing that this was an accolade that must jealously be guarded.

He noted that threats posed by electoral violence, if not properly managed risk rolling back the county’s development dividends, adding “we, therefore, cannot afford to ignore these emerging threats as we approach 2020 election, they must be of great concern to us all”.

Prof. Manso commended the Security Agencies for their commitment to safeguarding the peace and security the nation currently enjoys and stressed that security was a shared responsibility.

Mrs Gifty Eugenia Kusi, Deputy Western Regional Minister said the government has taken a serious view of the issue of illicit small arms and light weapons and has adopted measures that would prevent criminals, armed groups, and other non-state actors from having access to illicit small arms which are always the weapons of choice for criminals.

Mrs Kusi said the Government has provided the Commission with resources to mark state security agencies’ weapons, stating that the marking of the weapons of the Ghana Police Service and Immigration Service were almost completed.

She explained that the marking exercise would enhance the accountability of weapons, facilitate easy tracking and identification of stolen or lost arms.

With the right policy intervention, technical and financial support including requisite training for blacksmiths associations to control the manufacture of illicit artisanal small arms, the industry could be promoted to create employment for the youth, Mrs Kusi said.

She said the blacksmithing industry could be properly harnessed for the manufacturing of quality household items, farming implements, auto parts, hospital screens, and metal beds, among other things.

That, the Deputy Western Regional Minister said, would strengthen the fight against the production of artisanal small arms through close collaboration with blacksmith associations and channel their skills and energies into meaningful ventures.

Touching on the December polls she said, ” On December 7 Ghanaians are going to the polls to exercise our franchise and to elect our political leaders, this should be done in peace, do not carry a weapon to any polling station since section 7 of the Arms and Ammunition Act,1972 prohibits the display or discharge of your firearm in public”.

She called on the media to be circumspect in what they say or report and asked them to join the government and the Commission in educating and sensitising Ghanaians, particularly the youth on the dangers of armed violence and help promote peaceful general elections, peacebuilding, and Armed -violence-free societies.