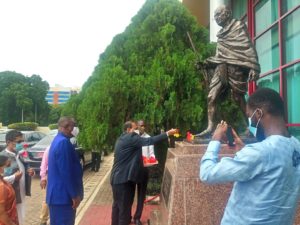 The Indian High Commission in Accra and the Ghana-India Kofi Annan Centre of Excellence in ICT (AITI-KACE), have climaxed the two-year celebration of the 150th birthday of Mahatma Gandhi, the Father of modern India.

At the event, Mr Sugandh Rajaram, Indian High Commissioner to Ghana and Mr Kwasi Adu Gyan, the Director-General, AITI-KACE, offered floral tributes at the statue of Gandhi at the AITI-KACE premises in Accra.

He was a lawyer, a politician, a social activist, and a writer who became the leader of the nationalist movement against the British rule of India.

Gandhi is internationally esteemed for his doctrine of nonviolent protest (satyagraha) to achieve political and social progress.

As such, on 15 June 2007, the United Nations General Assembly voted to establish October 02, as the International Day of Non-Violence.

Mr Rajaram, who hailed Gandhi for his principle of nonviolence, also described him as a global icon and the most influential personality of all times.

He said Gandhi believed in truth, peace and nonviolence; and that his principles were still relevant to the growth and development of humanity.

The High Commissioner noted that Gandhi believed in the divinity of labour.

Regarding India-Ghana relationship, Mr Rajaram said the AITI-KACE was an epitome of the bilateral relationship between the two countries.

Mr Gyan, who also lauded Gandhi for his principle of nonviolence, said the dream of Gandhi was made alive in 2003 by the establishment of AITI-KACE.

He noted that the Centre had since its establishment opened two branches – in the middle belt and northern sector of the country.

Mr Gyan hailed India for its efforts in assisting Ghana to become a world-class technological hub.

The event was attended by members of the Indian Community in Ghana.

There were cultural performances and a Quiz on Gandhi for school children.