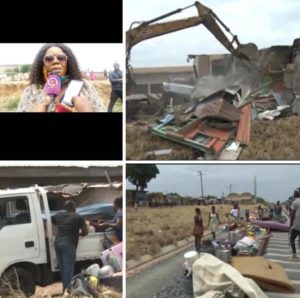 The Ghana Railway Development Authority in the early hours of Friday demolished structures in Tema to make way for the 92 kilometre Tema-Mpakadan Railway Project.

The makeshift structures situated in the Tema Industrial Area, were pulled down leaving hundreds of squatters stranded.

Nana Afua Ohenewaa I, Corporate Affairs Director, Ghana Railway Development Authority, told journalists that even though they agreed that due to the pandemic, it was a wrong time to carry out the demolition exercise, the continuous stay of the encroachers on the buffer land of the rail line was delaying the project.

She explained that the project had already delayed due to the COVID-19 pandemic and failure of her outfit to provide the needed land for the contractors to work could amount to additional charges to government which she said would be borne by every Ghanaian through taxes.

She added that there was the need to construct drains to carry away rain water from the lines to ensure the longevity of the project, noting that due to the presence of the encroachers, it had been impossible to do so.

Nana Ohenewaa pointed out that several eviction notice had been issued to them in collaboration with the TDC Development Company to no avail, stressing that it was dangerous to reside near a rail line.

The rail lines, she noted, must have a buffer of 50 metres stretch on both sides, a position she said the encroachers had defied putting their lives and that of children at stake.

“When the train starts operations, it will move at a speed of 120 kilometres per hour so we cannot have people residing near the rail lines. If we allow them to stay here, one day a train will knock a child and it will be blamed on us, it is better they relocate now”.

Some evictees say they were very worried about the demolition which they said took them unaware as the officials moved in at about 0300 hours when they were asleep.

They said even though they had received a number of notices to vacate the place, they did not bother.

According to the occupants, majority of them who did menial jobs, had lost their work due to COVID-19 and appealed to the authorities to get them a temporal place to reside especially during this rainy season.

Days after Standard and Poor’s downgraded Ghana to junk status, another ratings agency, Fitch has …