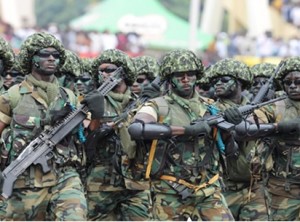 The Danquah Institute, a policy think-tank has said its week-long tour of entry points in the Volta Region revealed no sign of military intimidation of indigenes as rumoured or feared to be the case.

Government had deployed military officers to beef-up support for immigration officers struggling to effectively man the many unapproved routes to the country’s eastern border following its closure on the midnight of March 22, this year, as measures to combat the spread of COVID-19 pandemic.

The deployment generated controversies particularly in the Ketu South Municipality including allegation of military intimidation and discrimination by the citizens in that jurisdiction.

A press briefing by the Institute addressed by Mr Richard Ahiagbah, its Executive Director, at Aflao had observed that the Immigration, the Military, and the police officers during their tour were seen working interactively with residents at the several entry points they visited.

The Institute said the nationwide military deployment was part of enforcing the Executive Instrument (EI) 64 and 65 unanimously approved by Parliament to protect Ghanaian lives in the wake of COVID-19 and not attempts to disenfranchise people in the Volta Region.

The statement considered it disingenuous on the part of Mr Bedzrah, and the Volta Caucus in Parliament, who voted to pass E.I 65 into law, to now come to the Volta Region “to issue a 24-hour ultimatum to the President to cease the enforcement of the law” they passed.

The Danquah Institute’s Boss described the idea that the military officers were in the region to prevent people from registering to vote as false pretext by the NDC to cause chaos and pursue voter registration illegalities.

“Voter Registration in the Region was taking place peacefully from Alavanyo to Aflao,” he noted.

He said the first-hand observation the NDC MPs had to speak to was their post briefing visit to the main border in Aflao and Wudoaba in the Ketu South Constituency and “everything else they have told us from their press briefing is made up and hearsay.”