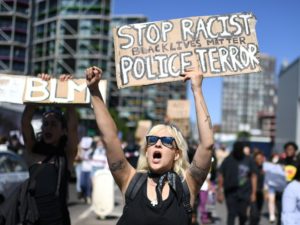 Police in Minneapolis, Minnesota, USA, arrested a man, an African-American, George Floyd, who later died in their custody after they cuffed him, held him on the ground and three officers knelt on him with one, Derek Chauvin kneeling on his neck till he died. The death, not the only one in recent times, has sparked protests calling for an end to police brutalities, especially, against blacks.

Jeff Lowenstein, shares his thoughts on the matter in this piece.

Now, while the cleaning up of the glass and ash on the ground and the power washing of graffiti-covered buildings has begun. Acts of restoration powered by good and big-hearted and generous people who care about our communities and who want to rebuild what has been shattered and are bringing their precious time, energy and labor to this effort.

Now is the time to speak out against the police brutality that has ravaged communities of color for generations, to call out the culture of silence among law enforcement that is beginning to crack, but must be eradicated.  And to remove the near comprehensive immunity that those with whom we have entrusted the sacred duty of serving and protecting-a responsibility that many fulfill with honor and valor and integrity-have been cloaked in for too long.

Now is the time to understand that words, even the beautifully honest, wise, heartfelt and moving ones spoken by Minnesota Gov. Tim Walz and Atlanta Mayor Keisha Lance-Bottoms, are not enough.  They are not enough because the trust between many elected officials and communities of color has been ruptured to the point where swift justice for the officers who carried out and watched George Floyd’s brutal murder is a necessary, but by no means sufficient, condition for healing. Not enough because the abuse has gone on and been unpunished for so long.

Now is the time to state unambiguously that there will never be any moral leadership on this and all manner of issues from our President, to give up any hope, if we ever had any, that the man would meet the challenge of this moment with anything other than the same divisive and hateful rhetoric, the same promises of violence, and the same failure to recognize all people as having equal worth that have been his hallmarks for the past 30 years and were a central thrust of his campaign from the moment he declared his candidacy for the nation’s highest office.  We are on our own on this one, and always have been.

But now is also the time to face the truth that while President Obama’s victory had enormous historical and symbolic and actual significance, far too many residents of African-American neighborhoods that played an enormous role in propelling him to victory did not experience meaningful, left alone the transformative, change he had promised.  Beyond that, the past 40 years have seen systematic extraction from, and disinvestment in, many of these communities, while the income gap between the corporate and ultra-wealthy looters and many of our poorest people has grown to vast dimensions.

It is the time to say that there is a straight line from George Floyd’s quiet plea for his life to Rodney King’s prostrate body being systematically beaten on the side of a Los Angeles freeway to Emmett Till’s mangled corpse being lifted from the Tallahatchie River and courageously shown in an open casket by his mother, Mamie Till Mobley. She said she wanted the world to see and know what J.W. Milam and Roy Bryant had done to her son.

From there, the line of white supremacy enforced by violence and embedded in capitalism stretches back through the lynchings of thousands of black men throughout our country in public events often advertised in newspapers, attended by large swathes, if not all, of the white families in a community, and commemorated on postcards.  The line extends all the way back into the fabric of our founding documents, nestled among and alongside the lofty pledges of life, liberty and the pursuit of happiness and the intention of our people to create of a more perfect union-declarations that have inspired people around the world for the more than 225 years since their writing. The slavery that began in the 1600s was codified without name in three different places within our constitution: the non importation, three-fifths, and fugitive slave clauses.  These provisions delineated the continued importation of enslaved people to our new nation for its first two decades, the counting of those enslaved as less than a full person, and the requirement that people in states that did not practice slavery return those who had fled to freedom.

Now is the time to acknowledge squarely the unearned benefits this system has bestowed on those of us who are white-benefits that are not some dim historic legacy, but that continue on a daily basis in far too many areas of life-from health care to education to access to clean air and water to the costs of food and insurance to our interactions with police.  To say that, while these current protests focus on police brutality, that we have many interrelated levels of inequality and injustice in our society that all call with fierce urgency to be addressed in root ways.

Now is the time to understand that the only way to have a semblance of a chance to regain the trust that has often, if not always, been tenuous at best with communities of color and the larger society, is to listen with humility and respect and openness and non-defensiveness.  To not instantly put ourselves in the position of arbiter and judge of what is and is not valid, but simply to listen and try to understand that which is incomprehensible to those of who have not had the same lived experiences. Now is also the time to acknowledge that we must go beyond listening and engage in meaningful partnerships in which those who have been adversely affected by oppression lead while we play supportive roles.

And now is the time to take an unflinching look at history and learn from the fate of other nations who have been in this similar spot before us.  Countries like Germany after World War I, when a fledgling democracy was undermined, and eventually toppled, in no large part because those on the left and the right who opposed not just the government in power, but the very concept of democracy, numbered more than half of the citizens.  We are not at the same point here, but we cannot look away from the troubling presence of white supremacists, anarchists and antifascists  across the country who have used the peaceful protests for their own destructive purposes.

The situation is grave and the stakes are high.

The work is hard and the path is long.

Our current national leadership makes it that much harder, and therefore all the more necessary.

But we must undertake this task. .

To not do so would be an unacceptable admission that we have failed and given up on all that we have aspired to be as a national community.

As we begin this arduous journey, we can draw strength and inspiration from the legendary acapella group Sweet Honey in the Rock, who adapted the words of the late, great and  tireless social justice warrior Ella Baker:

“We who believe in freedom cannot rest until it comes.

Until the killing of black men, black mother’s sons,

Is as important as the killing of white men, white mother’s sons.”

Now is the time.

The author is the founder and executive director of the Center for Collaborative Investigative Journalism (CCIJ) and the Padnos/Sarosik Endowed Professor of Civil Discourse at Grand Valley State University.