May 31, 2020 General News Comments Off on Ghana has the potential and good climate to grow apple – CRI confirms 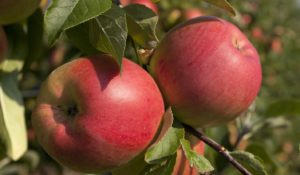 The Crops Research Institute (CRI) of the Council for Scientific and Industrial Research (CSIR), has made a strong case for Ghana to show interest in apple production.

“It is our position that the Government takes a critical look at the prospects of producing the fruit in Ghana,” the Institute advocated, citing on-going experiment on the potential production of apple in the country.

Experiment on the edible apple ‘Malus domestica’, had been on-going in the last two years, at Atimatim-Taaboum in the Kwabre-East District of the Ashanti Region.

A statement issued by the CSIR-CRI, copied to the Ghana News Agency (GNA), Kumasi, said the plant, whose fruits average 26.8 mm in diameter transversely and 18. 0 mm longitudinally, had been subjected to various treatments over the years.

“The final treatment was scheduled for March, 2020, but had to be postponed due to the COVID-19 pandemic,” it noted.

According to the team of research scientists and horticulturists working on the project, the leaves and fruits were subjected to the mobile app, PlantSnap, confirming the features and identity of the plant, which started fruiting two (2) years after planting in Ghana.

The leaves are simple and serrated with net venation.

The statement indicated that the seedlings were generated from cuttings and all, but one of the plants got destroyed after the three years into the experiment.

Explaining further, it said the proponent of the initiative, Mr. Edward Akwasi Fosu, a technical assistant with a private firm in Antwerpen, Belgium, for the trial, collected soil samples from different temperate and tropical regions worldwide, including Ghana.

The idea was to germinate apple seeds.

His results revealed that it took four (4) days for seeds to germinate in the Ghanaian soils, while other soils required a minimum of ten (10) days for germination.

The statement said: “Fascinated by this, he increased efforts to grow the seedlings in Ghana. Therefore, ten (10) seedlings were brought into the country in 2016, and planted in a house at Atimatim-Taaboum.”

The research scientists and horticulturists stated that: “The CSIR-CRI is capable of using tissue culture techniques to evaluate and confirm the experiment.”

The statement expressed the hoped that the final treatment will be done as soon as possible to allow the fruits to grow to the edible size.

The GNA gathered that Ghana imports from South Africa huge amounts of fruits annually, which runs into several millions of US dollars.

According to the 2018 United Nations’ COMTRADE database on international trade, Ghana’s combined importation of apples, pears and quinces was estimated at about $7.27 million.

The CSIR-CRI research scientists have confirmed that: “Indeed, in Ghana, apples can grow in very cool areas like Abetifi, Amedzofe and Aburi.”

These areas, according to the experts, experience temperate-like weather conditions that could accommodate the growth of apples, and also allow apple trees to go through chilling stress before flowering.