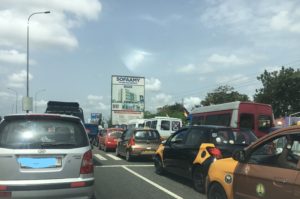 Personnel of Operation COVID SAFETY will strengthen the enforcement of the restriction of movement order by the President in its second week to prevent breaches and keep citizens safe against the spread of COVID-19.

The Director of Public Affairs Directorate of the Ghana Police Service, Superintendent of Police Sheila Abayie-Buckman, explained that it was likely for those who were now tired of staying at home to venture out; however, they would be restrained.

“We will engage, persuade and scale-up operations by increasing police visibility in the next week”.

She was speaking in an interview with the Ghana News Agency on Saturday on the compliance level of the order in Accra.

The restriction of movement order came into effect at 0100 hours on Monday, March 30, with 40 localities and contiguous districts in the Greater Accra and Greater Kumasi areas being affected.

Majority of the nation’s 205 confirmed cases were recorded in these areas.

Supt. Mrs Abayie-Buckman said though the compliance level was generally good, some deviants were arrested but warned against repeating the offence.

“The idea is not to arrest people but to make them know the danger in social gatherings and the likelihood of spreading the disease in this crucial period when moving about.

“They are, therefore, advised to continue to stay indoors for the second week of the two-week lockdown,” she said.

Personnel of the Police, the lead security agency in the operation, and those of the Ghana Armed Forces, the Ghana Immigration Service among others, have mounted road blocks to restrict intercity movements.

The restrictions do not, however, include those carrying cargo, essential service providers and media practitioners.

Supt. Abayie-Buckman pledged the commitment of the Police to protect the citizenry against the spread of the disease, saying they would also protect frontline health care givers who would be moving to do contact tracing, test presumptive cases and treat or manage those who had tested positive.

Meanwhile, the Legal and Prosecution Department of the Ghana Police Service had announced that those who defy the clear guidelines given by the President in the movement restriction order risked paying a fine of between GH¢12,000.00 and GH¢60,000.00.

Those found guilty by a court of law will either serve a jail term of four to 10 years, be made to pay a fine or receive both punishments.