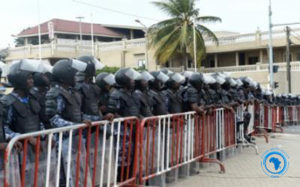 The Togolese government has issued a communiqué through the Ministry of Territorial Administration of Decentralization and Local Authority warning citizens against taking part in any illegal demonstration in the capital,  Lomé on Friday.

The communiqué signed by the sector Minister, Payadowa Boukpessi, released Thursday evening said, “we learned that Dr. Agbéyomé Kodjo planned to organize a public demonstration on Friday,” against, “Law No. 2019-019 of August 12, 2019 amending law No. 2011-010 of May 2019-fixing the conditions of exercise of the freedom of assembly and public peaceful demonstration, …thus illegal.”

The Ministry further warned, “all those who will take part in it will be guilty of participating in an illegal demonstration,” and that the security forces would be deployed to uphold the law to allow people go about their daily businesses freely.

On Thursday afternoon, former Prime Minister, Dr. Agbéyomé Messan Kodjo, one of the 2020 Presidential Candidates assured members of his Party and other followers that the demonstration would come off as earlier planned.