February 28, 2020 Africa/International Comments Off on Morocco trains over 40,000 foreign students 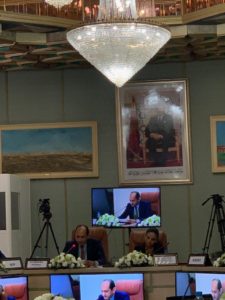 Over 40,000 foreign students have over the last three decades, benefited from higher education, technical and vocational training in Morocco.

Mr. Mohammed Methqual, the Ambassador Director-General of the Morocco International Cooperation Agency (AMCI), said the trainees were drawn from 117 countries.

Currently 14,000 foreign students are studying in the Kingdom, through AMCI, and 85 per cent of them, are on scholarship.

He was addressing the Third Morocco-Pacific Islands States Forum in the Moroccan Southern city of Laayoune.

Morocco has always had strong relations with countries of the south and this has been marked by solidarity, mutual respect and the promotion of common ideals.

In 1986, Morocco established the AMCI, a public institution, that operates under of the Ministry of Foreign Affairs, to contribute to strengthening its relations with partner countries through academic, cultural and technical cooperation.

He said South-South Cooperation was one of the major pillars of the Kingdom’s foreign policy, adding that, developing human capital and sustainable progress were at the centre of every initiative or action they took.

AMCI has been playing pivotal role, to empower the youth – foreign students to receive education in Moroccan universities, technical and vocational training centres.

He said a new proposed partnership between the Kingdom and the Pacific Islands States, to be launched at the forum would provide impetus to socio-economic progress of their peoples.

“We must join together, unite our efforts and work together to continue our work and help accelerate the realization of the ideals of our peoples.

“This ambition can be achieved through important programmes that we have proposed in the road map, to strengthen our bilateral cooperation and which we can discuss during technical meetings.”

Can the AfCFTA minimise trade misinvoicing and illicit financial flows in Africa?

Africa will not become testing ground for COVID-19 vaccine – WHO