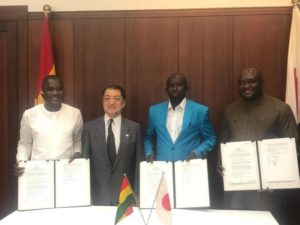 The Japan Government through the Grassroots Human Security Project (GGHSP) has assisted three organisations to construct Boreholes in Binduri, a Primary School Block at Nyohini, and a CHPS Compound at Baaya, totaling $245,633.

The GGHSP Grant Contract signed at the Residence of the Japan Ambassador to Ghana, Tsutomu Himeno was witnessed by the Binduri Constituency Member of Parliament Dr. Robert Kuganab-Lem, the Binduri District Assembly Mr. Ayinga Abagre Yakubu and other stakeholders.

he project will have 20 Boreholes to be constructed in seven health facilities and thirteen communities in the Binduri District, which do not have access to clean and sustainable supply of water.

The project with a Grant of $84,150 is expected to help in addressing the water challenges in the seven health facilities and the thirteen communities which will cover about 22,000 people.

Also, a Grant of $90,847 was signed with Mr. Shei Fuseini, the Director of Initiative for Sustainable Democratic Development for the Construction of a Primary School Block at Nyohini in the Northern Region.

The project will have a 6-Unit classroom block and furniture (Dual desk and chair for teachers. Currently, the Nyohini Children’s Home has 210 children under its protection with no proper classroom block.

As such, the children commute everyday on public transport to nearby schools.  This project will therefore improve access to education for pupils in the Children Home and nearby communities.

The third project, a Grant of $70,636 signed by Stephen Jalulah, the District Chief Executive of Pru West in the Brong Ahafo would go into the Construction of a CHPS Compound at Baaya in the District to improve access to health services in Baaya and seven surrounding communities. This will benefit over 3,900 people who walk about 8km in order to access basic health care.

Per the Grant Contract, the Pru West Assembly is to carry out all major maintenance work on the project.

The Japan Ambassador to Ghana, Himeno said, the support was in line with the GGHSP and also to develop the friendship between the two countries.

The Binduri DCE Ayinga Abagre assured that, the Assembly will implement the project to its successful end to ensure the community benefits from it.

He said, the Assembly intended to form and train community and institutional water management teams across all locations of the project to take care of minor maintenance while the Assembly would be responsible for major maintenance.

Mr. Ayinga Abagre expressed gratitude to the Japanese Ambassador, the people of Japan and the project team for the kind gesture extended to the Binduri District and called for more partnership and support in areas such as Education, governance, health, water and sanitation.