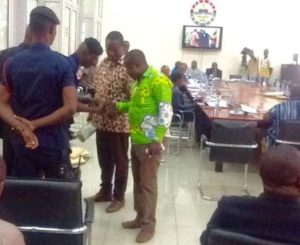 The Public Accounts Committee (PAC) of Parliament on Monday ordered the arrest of two officers of the Sefwi Akontombra District Assembly for not being forthright on the absence of 62 payment vouchers totaling GH¢126, 000.

The PAC at an earlier meeting with officials from the assembly last week, raised questions on some 62 payment vouchers that could not be accounted for.

After further enquiries, PAC could only trace nine of the payment vouchers.

The PAC Chairman noted that most of the payment vouchers that were submitted to the Committee did not match with the current receipts and had different reasons stated for spending, following a check.

Mr Akowuah and Mr Essilfie made fruitless efforts to explain the non-submission of the payment vouchers to the district auditors for scrutiny. However, the Committee refused to accept their explanation, saying it was not convincing

Unimpressed with their responses, Dr Avedzi said the behaviour of the two was a careful attempt to keep some payment vouchers from the Committee, and that, he said, was in contempt of the Committee.

He accused the two officers of conniving to deceive the Committee and hold it to ransom.

“So the two of you will want to hold this Committee to ransom by coming to deceive us to take anything and get away with it?”

He therefore ordered the police officers who were present at the hearing to lockup the two officers at the Parliament Police Station, and take their statements to help with prosecution.

The two finance officers were eventually whisked away by the Parliament Police for interrogation.

The Public Accounts Committee on January 13, 2020 began working on the Auditor-General’s 2016 report with some representatives from Metropolitan, Municipal and District Assemblies (MMDAs) in Greater Accra, Western and Volta Regions already appearing to defend their spending.

Dr Avedzi warned at earlier sittings that the Committee would subpoena, and charge un-cooperating witnesses with perjury and default, if it found grounds to do so.

The Public Accounts Committee is a committee of Parliament consisting of not more than 25 Members and is chaired by a Member who does not belong to the Party which controls the Executive branch of Government.

The duty of the Committee is to examine the audited accounts showing the appropriation of the sums granted by Parliament to meet the public expenditure of the government as presented to the House by the Auditor-General of Ghana.