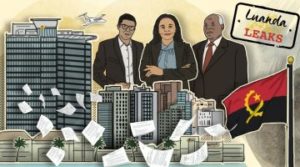 She spun a story the world wanted to believe: a self-made billionaire who had risen in a male-dominated business world in an African country ravaged by civil war and poverty.

In public appearances in the spring of 2017, Isabel dos Santos, then head of Angola’s giant state oil company, Sonangol Group, mingled with Hollywood legends on the French Riviera and charmed oil tycoons in Houston with tales of hard work and accomplishment. Wearing her trademark black blazer at the London Business School, the 44-year-old chairwoman told a packed audience that leaders should be chosen on their merits.

“I’ve been managing companies for a long time, starting them from small, building them up, going through every single stage of what it takes for a company to be successful,” she said.

Left unmentioned in London: That she had been installed in the top job at Sonangol by her father, José Eduardo dos Santos, the longtime Angolan autocrat. That over the years he had awarded her companies public contracts, tax breaks, telecom licenses and diamond-mining rights. And that even as she spoke to the crowd of aspiring entrepreneurs, she was paving the way for one of her most brazen insider deals — the payment of tens of millions of dollars from the state oil monopoly to a company in Dubai controlled by her business partner.

Luanda Leaks, a new investigation by the International Consortium of Investigative Journalists and 36 media partners, exposes two decades of unscrupulous deals that made dos Santos Africa’s wealthiest woman and left oil- and diamond-rich Angola one of the poorest countries on Earth.

Based on more than 715,000 confidential financial and business records and hundreds of interviews, Luanda Leaks offers a case study of a growing global problem: Thieving rulers, often called kleptocrats, and their family members and associates are moving ill-gotten public money to offshore secrecy jurisdictions, often with the help of prominent Western firms. From there, the money is used to buy up properties, businesses and other valuable assets, or it is simply hidden away, safe from tax authorities and criminal investigators.