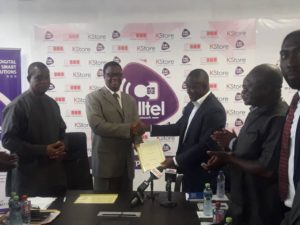 A memorandum of understanding to that effect was signed between the two companies in Accra with the Founder and Executive Chairman of Celltel Networks, Dr Prince Kofi Kludjeson and Chief Executive of Ed and Co, Emmanuel Dabi, initialing the agreement.

As part of the deal, Ed & Co would arrange and manage the relationship between various institutions or individuals and the banks that would underwrite the subscriptions on clients’ behalf.

The Ghana Smart Cities project, designed to provide affordable nationwide Wi-Fi network in collaboration with the local government institutions and other strategic and relevant government agencies, is scheduled to begin in the second quarter of next year.

The Celtell Chairman said it would provide affordable Apple handheld devices, laptops on subscription and flexible payment terms to enable many more Ghanaians to own Apple devices and pay in instalments.

“Beyond the Apple devices, we will also distribute digital television sets that make access to the internet at home easy – this one also comes on a subscription basis,” he added.

He explained that every level of subscription would come with one device or the other and the vision is to enable access to education, health, security, business and other relevant materials on the internet in the comfort of homes, offices, school and more.

Celltel and its partners, including Cisco, Hughes Corporation, Apple, and some local broadband spectrum licensees are currently funding the installation of the nationwide Wi-Fi infrastructure and provision of affordab le smart devices to customers across the country.

Dr Kludjeson said Celltel had already made contacts with various institutions, including the Ghana National Association of Teachers, to provide KQ branded handheld smart devices as well as laptops and smart televisions on monthly subscription basis.

He said the company has already recruited several young Ghanaian professionals who have been working with partners abroad to establish a reliable network and build custom-made solutions for various categories of subscribers.

“We are also at the finishing stages of an assembling plant within the Free Zones enclave at Tema to ensure local assembling of affordable devices sooner than later – this will provide jobs for several young Ghanaians,” he said.

The Celltel Founder said the project would provide opportunities for many several young entrepreneurs who will be the main agents in the various districts and get to share in the wealth that will be created locally.

“We are going to bring everybody else on board in the consortium so that we can empower everybody so that the 275 constituencies can be covered and be funded through the off taker agreement,” he said.

Celltel Networks believes in the government’s Digital Ghana Agenda, characterised by paperless services at all government offices, digital address systems, and various electronic services such as e-education, e-health, e-agriculture and many more.

The Executive of Ed and Co said they were already in talks with several banks and Finance organisations who have expressed interest in underwriting subscriptions for prospective customers.

“We are so delighted to be appointed as the transaction advisors of the ICT Company Celltel Network and hope that we all put our hands on deck we will try as much as possible and get this particular fund that is the $500 million for the project well structured,” he said.

“We will make sure that this smart city concept of Celltel Company will come to fruition.”

‘Born too soon or too light’ and kidney disease in Ghana