December 11, 2019 General News Comments Off on Hungary to provide humanitarian assistance to Ghana 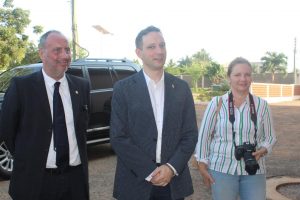 Hungary is committed to provide humanitarian assistance to Ghana especially to the less privileged in society, Dr Tristan Azbej, the State Secretary in charge of Hungary Helps Humanitarian Aid Programme, has said.

Dr Azbej said Hungary is keen to help the poor and the destitute to promote economic growth in the country and the sub-region for holistic development.

Dr Azbej, who is also in charge of Hungary Aiding Persecuted Christians, said this in Accra in an interview with the Ghana News Agency during a visit to Ghana.

The visit is to explore economic cooperation, empower persecuted Christians and the need to prevent illegal migration through humanitarian support.

He met with representatives of Church missions like the Maker’s House Chapel International in Accra, the Salesians of Don Bosco Aglophone West Africa Province, a and section of the youth.

He commended Ghana for being the beacon of peace in the West Africa, adding that ‘Ghana is respected for promoting cultural diversity for peaceful co-existence’.

“We will meet with government officials to explore potential ways of cooperation between the two countries and report to the Hungarian President to chart the path for further deliberations and assistance on social and economic policies for the poor”.

Touching on persecuted Christians across the world, Dr Azbej urged Christians to hold on to their faith irrespective of the discrimination and abuse they face from attackers.

He said there are more than 200 million Christians persecuted across the World because of their faith, stressing that Hungary was committed to provide humanitarian assistance and support to victims of such acts.

Hungary is the first country in the World to address the aiding of persecuted Christian communities at government level.

A survey conducted by the Pro-government Nezopont Institute in Hungary shows that two-thirds of Hungarians support government’s humanitarian policy.

About 65 per cent of the survey’s respondents said the persecution of Christians is a problem and have agreed that Hungary should continue to provide significant aid to those around the World facing religious persecution.

Dr Azbej said his team first visited persecuted Christians in Burkina Faso, where some of them were seriously tortured and murdered because of their faith.

“We are thinking of starting humanitarian services for victims of persecuted persons in Burkina Faso and other countries to put smiles on their faces”.

He called for peaceful co-existence devoid of violence and hatred, urging Christians never to deny Christ even at the point of persecution.

On illegal migration, Dr Azbej said the Hungary government believes that creating opportunities for the youth to work and earn a living would solve the problem of rural-urban migration and inter-country migration.

He urged the youth to uphold the tenets of Christian values and never give up on their religious faith because of persecution, but continue to intensify their prayers for God’s protection on their lives.

Dr Azbej commended the leadership of the Salesians of Don Bosco Aglophone West Africa Province for training street and poor children in technical education for them to live a productive life.

He pledged to engage the leadership of the school for further deliberations on technical and financial assistance for sustained national development.