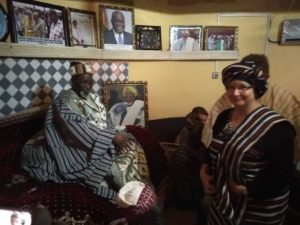 Madam Heather Cameron, Canadian High Commissioner to Ghana on Saturday paid a courtesy call on the Ya-Na Mahama Abukari (II) at the Gbewaa Palace at Yendi to congratulate him on his enskinment as the Overlord of Dagbon.

Madam Cameron, in a message to the Ya-Na and his elders, said her visit was in “recognition of our history and our future” expressing the belief that the peace in the traditional area would create opportunity for development and well-being of all the people in the Northern Region and the Dagbon Kingdom.

She spoke about areas of collaboration between Canada and Ghana, and mentioned education and sanitation and access to water.

She said “recognizing the agricultural potential of northern Ghana and the country as well a whole, as well as the importance of agriculture to livelihoods, we are proud of the work of Ghana and the Canadian Governments to modernise agriculture and revitalise extension services leading to increased yields”.

Madam Cameron said the Canadian Government was committed to improving the status of girls, and commended the Ya-Na for his leadership towards ending early, forced, and child marriages in the country.

She said “We know when girls stay in school longer and when girls marry later, then the poverty of the family is lowered and we know that their future children will be richer as a result of the opportunities given to girls now”.

The Ya-Na, whose statement was read by the Chief of Nanton, Nanton-Naa Mahamadu Bawa (V), spoke about the agricultural potential and mineral deposits in the Dagbon Kingdom, and said it must be tapped to generate resources for development.

He, therefore, urged the Canadian High Commissioner to lobby Canadian companies to invest in the Dagbon Kingdom to harness its resources for job creation and development.

He appealed for Canadian scholarships for the people of the Dagbon Kingdom to study engineering, medicine among others abroad to acquire critical knowledge to help in the development of the area.